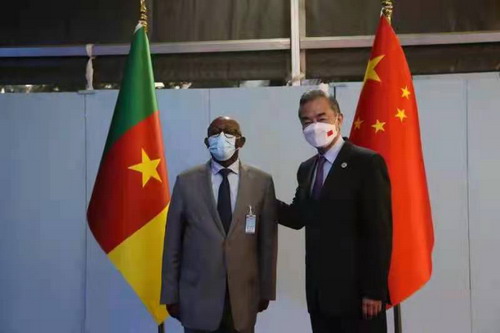 China and Cameroon maintain a deep traditional friendship, said Wang, when meeting with Mbella on the sidelines of the Eighth Ministerial Conference of the Forum on China-Africa Cooperation (FOCAC) held in Dakar on Nov. 29-30.

Wang said the pragmatic cooperation between China and Cameroon has benefited the two peoples. China is ready to work with Cameroon to implement the important initiatives announced by Chinese President Xi Jinping on cooperation with Africa and actively explore cooperation in green development, digital economy, agricultural trade and other fields, so as to help Cameroon achieve better development.

Mbella said the major initiatives announced by President Xi Jinping, including vaccine support for Africa and the "nine programs" will strongly promote Africa's development. This demonstrates China's global leadership, and will also push the international community to pay more attention to Africa.

Mbella thanked China for its tremendous support for Cameroon's economic and social development and anti-epidemic efforts. He said Cameroon looks forward to strengthening synergy and deepening practical cooperation with China to bring more benefits to the Cameroonian people.