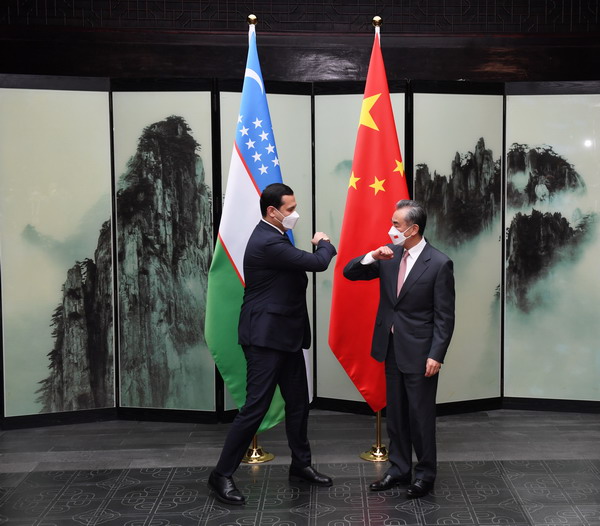 Wang said that, since the establishment of diplomatic relations between China and Uzbekistan 30 years ago, the two countries have trusted and supported each other, and cooperation in various fields has been continuously deepened, reaching an unprecedented high level.

He said China will continue to support Uzbekistan in exploring a development path suited to its own national conditions and stands ready to work with Uzbekistan to jointly implement the important consensus reached by the two heads of state to promote the development of bilateral relations.

China is willing to strengthen the docking of the Belt and Road Initiative with the plan to build a new Uzbekistan, enlarge cooperation on trade and investment and new energy, and foster a diversified and multi-dimensional cooperation framework, Wang said.

For his part, Umurzakov said Uzbekistan firmly adheres to the one-China policy and is committed to deepening friendly bilateral relations.

Uzbekistan appreciates China's development achievements and expects to draw on China's experience in governance, especially its experience in poverty reduction, Umurzakov said, adding that Uzbekistan is willing to strengthen cooperation with China in various fields.

The two sides agreed to strengthen connectivity cooperation; explore the potential for cooperation on agriculture; advance cultural and people-to-people exchanges as well as cooperation at local levels; and deepen cooperation on health care and pandemic response.

They agreed to strengthen communication and coordination in the Shanghai Cooperation Organization (SCO). Wang said that China fully supports Uzbekistan in hosting the SCO summit in the city of Samarkand and is willing to jointly oppose external interference and fight against the "three evil forces" of terrorism, extremism and separatism.

The two sides also exchanged views on the Afghan issue.