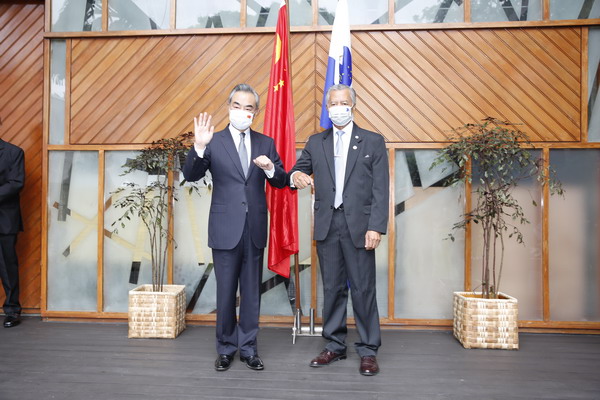 The Pacific Islands Forum (PIF) is the most representative inter-governmental organization in the South Pacific region, and China has been attaching great importance to its role in regional affairs, Wang said.

China has set up the China-PIF Cooperation Fund, and is willing to continue to strengthen dialogue with the PIF Secretariat, enhance mutual trust, conduct cooperation and support the PIF, so as to jointly consolidate and develop the relationship between the developing countries and the Pacific island nations, he elaborated.

Wang said the Chinese side supports the island nations' 2050 Strategy of the Blue Pacific Continent, and is willing to discuss cooperation in areas, such as marine ecological protection and e-commerce, to creat new growth points.

China will firmly push forward the opening-up to a larger extent, into a deeper dimension and to a higher level, and welcome more quality products of the island countries entering the Chinese market.

China stands ready to conduct more third party market cooperation with every country, especially those that have traditional influence in the region, to complement each other and form greater synergy so as to help the Pacific island countries enhance their capacity of self-development and push forward the realization of development and revitalization, Wang said.

Wang said China vigorously pushed forward the Paris Agreement and joined it actively. The country has mapped out and implemented a series of green and low-emission policies and measures, and will firmly honor its promises on climate change.

In the meantime, Wang said China, along with other developing countries including the Pacific island nations, is keen to urge developed countries to sincerely shoulder the historical responsibilities, fulfill their commitment to the developing countries, achieve carbon neutrality ahead of schedule, and hence make due contributions to solving the climate change issue.

China, within the framework of the South-South cooperation, will continue responding to the needs of small island countries and offering them help within its capacity, he said.

Puna highly appreciated the great efforts of China in tackling climate change. He commended China for establishing a cooperation center for China and Pacific island countries on climate change. He also expressed wishes to jointly forge ahead the implementation of the Paris Agreement with China.