The Chinese Foreign Ministry's "Love Knows No Borders - Let Dreams Fly" international charity sale in 2020 will be conducted online, involving live-streaming sales, for the first time due to COVID-19, starting from December 12. 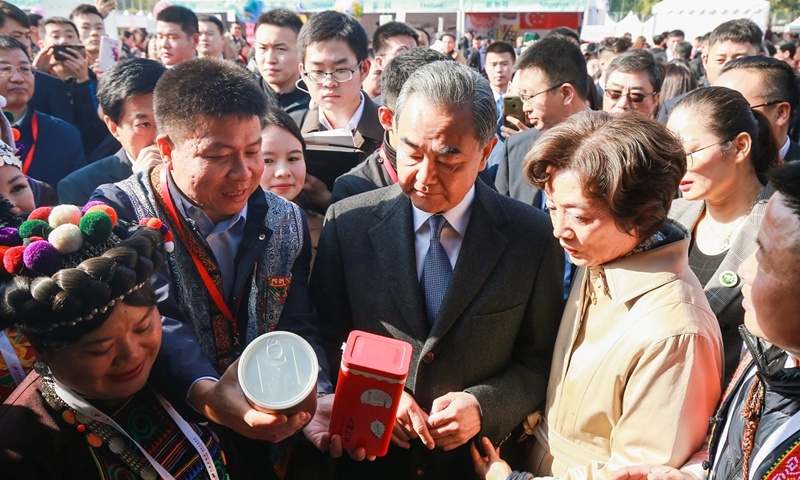 The charity sale was initiated by State Councilor and Foreign Minister Wang Yi's wife, Qian Wei, and hosted by the FM and China Foundation for Poverty Alleviation, and aims to help de facto orphans in Malipo and Jinping counties of Southwest China's Yunnan Province.

The opening ceremony will be held in Beijing on Saturday morning. Wang and his wife, diplomatic couples from 20 countries and representatives from 14 Chinese companies will attend the event. Other diplomatic envoys to China and representatives of entrepreneurs will participate by video link, Liu Xia, director of the women's work under the Chinese Foreign Ministry, said at a media briefing on Wednesday.

According to data from the ministry, so far, more than 40 embassies and representative offices of international organizations in China have registered to participate in the sale, and about 31 enterprises have donated.

The week-long online charity sale will start at 11 am on December 12, with a special webpage on Taobao.

The live-streaming sales will be held from 8:00 pm to 10:00 pm on December 16. Some diplomatic envoys in China and representatives of Jinping and Malipo counties will introduce the items for sale during the broadcast sales.

The Chinese Foreign Ministry is very grateful to the embassies in China for providing a large number of items for sale. However, due to online sales rules and product standards, some of the items will be difficult to sell online. For items not suitable for online sale, a special section will be set up for offline sales from December 12 to 31, Liu said.

Sun Jing, a deputy of poverty alleviation office under the Foreign Ministry, said the money raised from the charity sale will be used to care for more than 800 de facto orphans in Jinping and Malipo counties, including organizing their exchange, visit and training in Beijing, as well as their education and emergency fund.

A total of 8.12 million yuan ($1.24 million) fund raised in 2019 have been used to build school playgrounds for two high schools and four elementary schools in the two counties, Sun said.

Since 1992, the Chinese Foreign Ministry has committed to help the two state-level poverty-stricken counties. The "Love Knows No Borders" international charity sale, which was first held in 2009, has become an important part of China's fight against poverty.

In May, the two counties were removed from the poverty list. The ministry will help the two counties consolidate their achievements in poverty alleviation and launch the rural revitalization strategy, according to Sun.