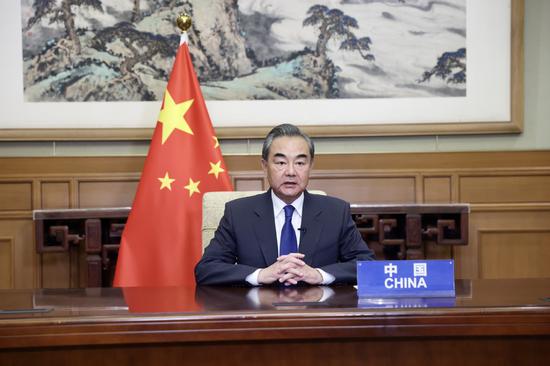 It came as Wang attended the foreign ministers' meeting of the 28th ASEAN Regional Forum via video link.

Wang said the region should consolidate the defense against the COVID-19 and jointly respond to the challenges brought by the pandemic. He noted China has, to date, provided 460 million doses of COVID vaccines to other Asian countries, including more than 190 million doses to ASEAN countries.

He called for strengthening multilateral cooperation to jointly respond to non-traditional security challenges, as well as issues concerning extreme climate, terrorism, cross-border crime, and cybersecurity, among others.

"There should be no more 'lecturers' or 'saviors.' The destiny of each country should lie in the hands of these countries themselves, and the future of the region should be jointly created by all countries in the region," added Wang.

Wang also called on ASEAN countries to continue the dialogue for peace to respond to the challenges of regional hotspot issues. "China is ready to conclude the Code of Conduct in the South China Sea (COC) that is effective, substantive and in line with international laws, including the United Nations Convention on the Law of the Sea."

Concerning the Korean Peninsula issue, Wang said the joint military drills by the United States and the Republic of Korea fall short of a constructive move under the current circumstances.

China will continue to support advancing denuclearization of the Peninsula in a balanced way and establishing peace mechanisms to strive for the political settlement of the issue, Wang added.