The Chinese Foreign Ministry on Friday urged the Japanese government to refrain from setting up non-market, manmade barriers and baseless political disruption to China-Japan economic and trade cooperation. 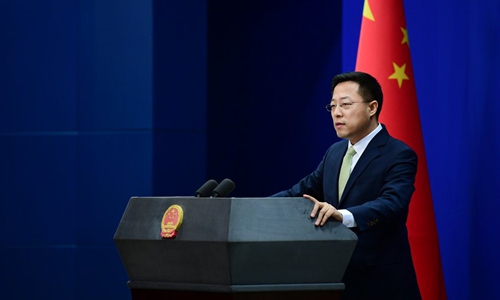 Chinese Foreign Ministry spokesperson Zhao Lijian referred to the Japanese government's recent assistance of the US in economically containing and cracking down on China, its implementation or plans on policies that aim to decouple with China in terms of supply chain.

The measures taken by the Japanese government have posed hurdles to normal economic and trade cooperation between companies from the two countries and put the mutually beneficial partnership at risk, Zhao said at the routine press conference.

It is hoped that the Japanese government refrains from setting up non-market, manmade barriers and baseless political disruptions for the sake of its own national interests and stabilizes the global order and supply chain, Zhao said.

Japan's extensive participation in China's reform and opening-up in the past has benefited the two economies greatly, the spokesperson pointed out, noting that China is a huge market with world-leading vitality and potential that will continue to foster a stable, fair, transparent and predictable business environment for global investors.

A White Paper by Japanese trade bodies this week revealed that among the surveyed Japanese enterprises in China, 90.4 percent held a positive attitude on plans to further expand the scale of local procurement in the next one to three years.