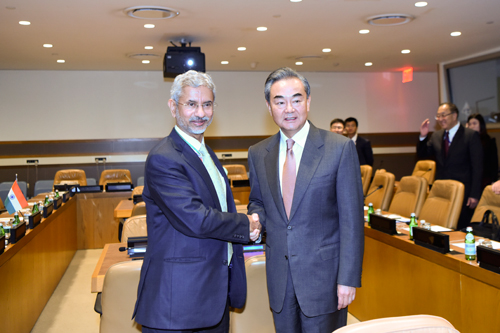 Wang told Jaishankar that China and India are the two largest developing and emerging economies and that the two countries should strengthen strategic communication, enhance strategic mutual trust, proper settle, and control differences.
The two diplomats met on the sideline of the high-level meeting of the UN General Assembly on Wednesday.
Jaishankar said India highly values the high-level exchanges between the two countries, and that it is willing to work closely with China on different issues and properly settle differences through dialogue.
Wang also met his South Korean counterpart Kang Kyung-wha in New York. 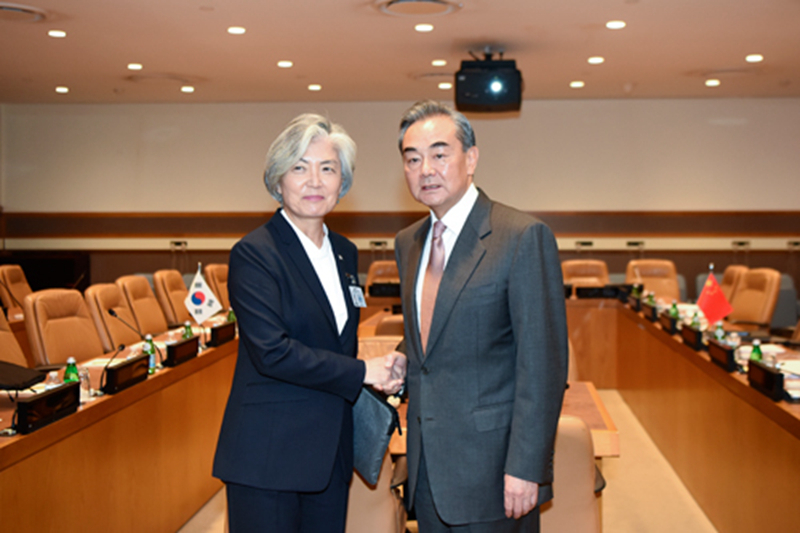 The two exchanged views on the current situation in the Korean Peninsula and agreed to boost ties based on closer coordination in various areas. Wang said China stands ready to work with the Republic of Korea (ROK) in advancing the bilateral ties to a higher level, calling for more cooperation in third-party markets and speed up the second phase of the Sino-ROK Free Trade Agreement talks.
Congratulating on the 70th founding anniversary of the People's Republic of China, Kang, for her part, said that the ROK would like to expand pragmatic cooperation with China in various areas and push forward the alignment of China's Belt and Road Initiative with the ROK's development strategy.
During a meeting with Panama's Foreign Minister Alejandro Ferrer, Wang said China will further improve bilateral ties and continue to encourage its enterprises to invest in Panama.
The two countries have signed over 50 deals since the two established the diplomatic relationship in 2017 and the export volume of Panama to China increased by 30 percent in 2018 compared to the year earlier, Wang said. It shows that bilateral cooperation is based on mutual respect and mutual prosperity, he added.
China does not attach any political conditions or geopolitical interests in economic cooperation with Latin American countries, and such cooperation is not targeting a third party or country, Wang stressed.
Ferrer echoed Wang, saying establishing diplomatic ties with Beijing is Panama's decision in accordance with its own interests, and the cooperation is mutually beneficial.
Panama highly values its relationship with China and firmly supports the one-China policy, and it is a reliable partner of China, the foreign minister said, adding that it wants to continue to enhance and deepen cooperation with China.