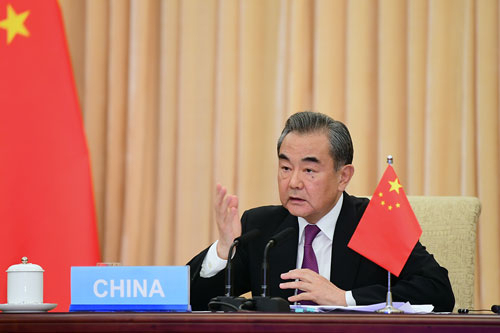 During a virtual meeting of foreign ministers of the BRICS countries, namely Brazil, Russia, India, China and South Africa, Wang called on the countries to promote global solidarity to fight the pandemic and be the guardians of people's health.

Noting that China has provided more than 350 million doses of COVID-19 vaccines to the international community, Wang said it is hoped that BRICS will continue to make vaccines global public goods, adhere to the principle of fair and reasonable distribution, support the World Health Organization in accelerating the implementation of COVAX, and support the World Trade Organization in making an early decision on an IPR waiver for COVID-19 vaccines.

Wang said it is necessary to accelerate the construction of the BRICS vaccine research and development center, support domestic vaccine companies to transfer technology to other developing countries, carry out cooperative production, and provide assistance for the global elimination of the "vaccine divide."

China proposes to establish an international forum for vaccine cooperation, with the participation of BRICS countries and companies welcomed, according to Wang.

BRICS countries should practise true multilateralism and be the defenders of the international order, Wang said.

Wang called on the BRICS countries to contribute to the recovery of the world economy. He noted that China supports the formulation of an action plan for BRICS cooperation in science and technology innovation with an aim to form new development momentum with technological innovation and digital transformation.

China has established an innovation base for the BRICS partnership on new industrial revolution in the city of Xiamen, Fujian Province, and looks forward to the active participation of the BRICS countries, Wang said.

The BRICS countries should strengthen cooperation in green industry, green technology, and green financing to jointly build a community of life between man and nature, Wang said, calling for expanding the "BRICS+" cooperation model and the BRICS New Development Bank.

Wang also called on the BRICS countries to resolve regional conflicts and confrontations, and make contributions to the world peace.

The BRICS countries should work to facilitate the political settlement of issues related to the Palestinian-Israeli conflict, the Iran nuclear deal, Afghanistan, the disposal of nuclear contaminated water from the Fukushima nuclear power plant in Japan, and terrorism, he said.

The countries should resolve differences through dialogues and consultations, and carry out more preventive actions, Wang added.

The ministers called for the strengthening of BRICS anti-epidemic cooperation, and supported for the holding of BRICS vaccine cooperation seminars to make greater contributions to global public health security.

Reaffirming the commitment to multilateralism, the ministers stressed to maintain the international system with the United Nations as the core, give full play to the role of the BRICS cooperation mechanism, and build a more fair, just, inclusive, equal, and more representative multi-polar international system.

The ministers highlighted the important role played by the New Development Bank in infrastructure construction and sustainable development, and welcomed China to established an innovation base for the BRICS partnership on new industrial revolution.

The ministers also made it clear that all conflicts should be resolved through dialogues and negotiations in accordance with international law.