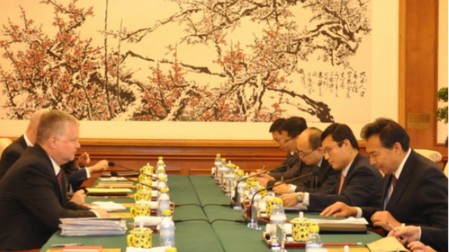 The two sides agreed that maintaining the momentum for dialogue and detente in the Korean Peninsula and advancing the political settlement of the Korean Peninsula issue serve the common interests of all parties concerned and accord with the shared expectations of the international community.

The Chinese officials said the government hoped the U.S. and the DPRK will resume dialogue and contact as soon as possible and meet each other halfway, adding that the two sides should seek effective solutions actively to establish trust and resolve differences.

The two sides exchanged views on phased, synchronized and packaged solutions to advance the denuclearization of the Korean Peninsula as well as building a peace-keeping mechanism on the issue, agreeing to maintain communication on the matter.

The U.S. Senate on Thursday confirmed Biegun as deputy secretary of state, and he will replace John Sullivan, who was confirmed last week by the Senate as the new U.S. ambassador to Russia.

Biegun, 56, has led the working-level denuclearization talks with the DPRK since he took his current post in 2018.

As China, Japan and South Korea are preparing for a summit in the Chinese city of Chengdu, Biegun is trying salvage negotiations with the DPRK during a trip to Asia.

On Monday, China and Russia jointly proposed a draft resolution in the United Nations Security Council calling for a political settlement to the DPRK nuclear issue and properly accommodating the country's call to ease sanctions.

Biegun said on December 16 that Washington would not be bound by Pyongyang's year-end deadline for progress in their denuclearization talks and signaled his willingness to make contact with the DPRK at the inter-Korean border during his visit to South Korea.