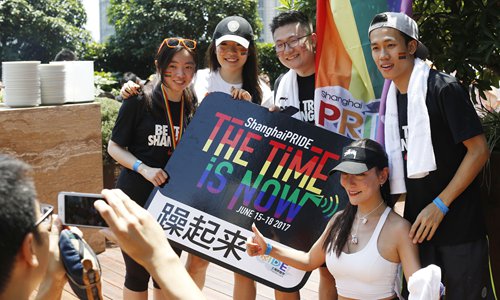 Participants pose for a photo during a Shanghai Pride running event on June 7, 2017. (Photo: VCG)

An official campaign to remove gay-themed content from China's Twitter-like microblog, Sina Weibo, ended as abruptly as it began, lasting only 66 hours.Last Friday, Weibo, which has some 400 million users, put up an official notice saying it would begin a three-month inspection period to "purify" its online environment. The campaign primarily targeted pornographic, violent and homosexual-related pictures, articles and videos.The announcement aroused anger among Chinese LGBT groups, who led a swift counterstrike by posting photos and comments on Weibo with the hashtag IAmGay.Related content using the hashtag has been viewed over 600 million times.Under such pressure, Weibo reversed its decision on Monday, saying the clean-up campaign does not include homosexual content. The LGBT community regards this as a rare victory.Over-analyzed policiesAfter Weibo first put up the official notice, several manga (Japanese animation) artists and fans in China immediately announced their retreat from the platform.One artist with 228,598 followers who has been drawing fan art of popular Japanese anime Coolheaded Hoozuki, said that, for security purposes, she would delete some of her art and content from Weibo."It appears that I cannot update more manga on Weibo," she wrote. "I will put them on Lofter instead, just search for my name. But if my account can make it through the three-month period, then we can all restart.""I don't understand, it's just entertainment. What's wrong with homosexual content? It's just as legitimate as heterosexual love stories," one reader told the Global Times, explaining that there is a large audience for "slash" content (romantic relations between two male protagonists), mostly heterosexual women.Xiaotie, director of the Beijing LGBT Center, immediately created a WeChat group to discuss the crackdown on Weibo. The group is comprised of directors of multiple LGBT organizations, lawyers and supporters both in and outside of China. They each expressed disbelief and jumped into heated discussions about what could be done. It was then that Xiaotie decided they would "counteract" Weibo's announcement via a variety of methods, including a domestic lawsuit, influencing Sina Weibo's stock market price and collecting LGBT stories to send to Weibo directors to show how large their community really is. She told the Global Times that she believes Weibo "over analyzed" China's governmental directives, as the government's official policies were not specifically targeted at LGBT content. "We will demand that Sina Weibo tell us what policy specifically directed them to do so," she said.In their counterstrike against Weibo, China's LGBT community received unexpected but welcome support from an official voice. Last Saturday, the WeChat account of People's Daily commentary section posted an article titled "Different fireworks can also blossom," explaining that homosexuality is not a disease.The widely shared article included a sentence explaining that "listing LGBT content with pornographic or violent content, or regarding LGBT as abnormal relations such as sexual harassment or sexual violence, can trigger public concerns."Nonetheless, the post was criticized by some for stressing that the LGBT community must also "take some responsibility"; detractors regarded this as "carefully sugarcoated commentary" that actually sides with Weibo.Hua Zile, the founder of Voice of Gay magazine, disagrees, telling Q Daily, an online magazine created by the former chief editor of Chinese Business News Weekly, that the editor of the WeChat account of People's Daily commentary section had reached out to him to see what can be done about the current situation.

Abnormal and unhealthyAh Qiang, director of Guangzhou-based NGO Parents and Friends of Lesbians and Gays (PFLAG), told the Global Times that he does not despise Weibo for making such harsh decisions against China's LGBT community. Instead, he is sympathetic and understanding."It's not only these platforms that have difficulties. Companies within the LGBT community have been shaky as well," Ah Qiang said. "If you are looking at gay apps such as Blued or Aloha, or lesbian social apps, they are having a hard enough time even without speaking up."On Weibo, Blued's official account only forwarded People's Daily's commentary and a previous TED talk by its founder Geng Le. Geng only sent out a post last Sunday suggesting Weibo change its wording. Neither immediately spoke up after the incident. Some in the community blamed them for not shouldering their responsibility. Blued recently secured a D-round of financing worth $1 billion in February. Geng met with Chinese Premier Li Keqiang in 2012 on World AIDS Day and has also received media coverage in recent years, many from State media, leading some to believe he will not voice his opinion as others in the community have due to his position.Ah Qiang feels that Weibo has relatively been open and LGBT-friendly in the past. This time, when they are facing pressure, they finally decided to take on the LGBT community, he said. Weibo's self-cleansing came against the backdrop of a recent large-scale government cleanup campaign of online user-generated content, such as short videos and microblogs.Just last week, joke app Neihan Duanzi, which belongs to China's tech giant Jinri Toutiao, was removed from online stores. According to Chinese authorities, the app contained "vulgar content and incorrect values." Such tech companies in turn announced their own campaigns to clean up content and enforce stricter self-censorship.Last Wednesday, Jinri Toutiao announced it would increase their content moderators from 6,000 to 10,000. CEO Zhang Yiming apologized in a public letter posted on Weibo to regulators, colleagues and users for allowing the app to "lose its way." The company's popular video app, Douyin, temporarily blocked its comment and livestreaming functions and announced it would implement a new "anti-addiction" system. In previous cleanups, LGBT topics were always deemed "sensitive" and among the first to be regulated. Last June, the China Netcasting Services Association (an organization under SAPPRFT with 604 members that include China Central Television and the Xinhua News Agency) released auditing criteria for online programs.Their criteria banned nine categories of content deemed to be obscene or vulgar, including "abnormal" sexual relations such as incest, homosexuality and sexual abuse, "unhealthy" views on marriage such as extramarital affairs, sexual freedom and wife swapping, as well as prostitution, rape, masturbation or anything that is "highly sexually stimulating."Even last month, news broke out that Call Me by Your Name, an Italian film that features a homosexual couple, was quietly removed from being screened at the Beijing Film Festival, which began last Sunday. It is suspected that pressure was exerted on the organizers, though there have been no further explanations. LGBT NGOs such as PFLAG are also being closely watched by authorities. Ah Qiang said he "goes to tea" with authorities at least once every few months. Starting this year, all PFLAG publicity and events began to carry the disclaimer that they "promote family harmony and parental love, promote healthy growth of our next generation and provide for our elderly."According to Ah Qiang, in the past, whenever Chinese homosexuals felt oppressed, most would choose to suffer the blow. Which is why he is grateful and proud of China's LGBT for speaking out against Weibo and fighting a difficult battle against social media censorship. Nonetheless, he feels the community should maintain a level head."The road for LGBT equality is still long, so we shouldn't be overly excited or radical," he said.