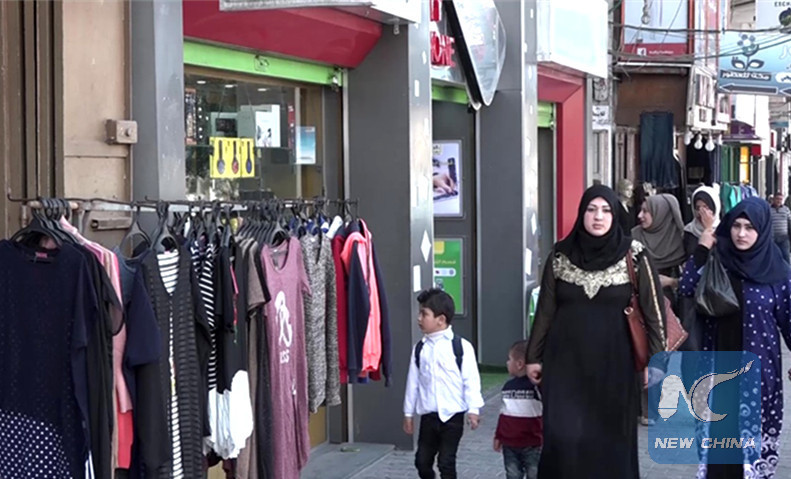 In this picture taken on March 21, 2018, Gazans passed by a store front in the Gaza Strip that has been under tight blockade by Israel since 2007.(Photo: Xinhua/Zhao Yue)

A short walk around the markets in the Gaza Strip can easily reveal how much Palestinians in the poverty-stricken enclave rely on Chinese goods, which are not only affordable but also with good quality.

China is the second product supplier, after Israel, for the 2 million population in the war-torn Gaza Strip which has been ruled by the Islamic Hamas Movement, Israel's bitter enemy, since 2007.

"I import all the goods I sell in my stores from China," Mohammed Abu Zeyada, owner of Smart Buy for Houseware, told Xinhua.

Thanks to his trade with China, Zeyada has expanded his business rapidly, owning three big stores in Gaza City now.

Zeyada, who started his business only two years ago, revealed that he only imports from China because the prices of Chinese products are affordable and the quality is high.

He praised the Chinese laws for making life easy for businessmen, citing that he has never faced any troubles while buying or shipping his goods in China.

In Gaza, there are dozens of customs clearance and support offices and companies that help Palestinian traders import goods from China.

Chinese goods are usually shipped to Israeli seaports, before transported into Gaza through the Kerem Shalom crossing, the only trade terminal between Israel and Gaza.

For Gazans, who have been suffering from deteriorating economic conditions due to Israel's 11-year blockade and the intra-Palestinian political division, Chinese commodities are always the best choice.

"China manufactures goods that suit every one, the rich and the poor," Mustafa al-Maqadma, a 52-year-old Gaza resident, told Xinhua.

Hanging around fashion shops looking for Chinese-made men's wear, al-Maqadma said he prefers Chinese goods because they at least are two times cheaper than other goods made in European or Arab countries.

"It is not easy to buy high quality items for low prices...China did that for the poor and middle-income people," he said, flashing a big smile.

The trade with China has been a grace for both Palestinian consumers and businessmen in Gaza. The consumers can buy the goods they want for cheap prices, while the traders can expand their business thanks to the high local demand for Chinese goods.

The volume of imports from China to the Palestinian territories of West Bank and Gaza Strip exceeds 500 million US dollars annually, he told Xinhua.

Al-Tabbaa explained that the importers prefer to deal with China because Chinese goods suit all tastes and meet different family needs with very reasonable prices.

"The Chinese products are suitable for the Gaza Strip in light of the economic deterioration that has been going on for years," he noted.

Gaza has been placed under a tight Israeli blockade since Hamas seized the territory by force after routing forces loyal to President Mahmoud Abbas in 2007.

In the past decade, Israel and Hamas have fought three major wars that claimed the lives of thousands of Palestinians and Israelis.

The blockade has pushed Gaza's 2 million population deeper into poverty by inflating the unemployment rate there.

Gaza's Chamber of Commerce said that the unemployment rate in the enclave stands at 46 percent, while the rate of poverty has passed 65 percent.