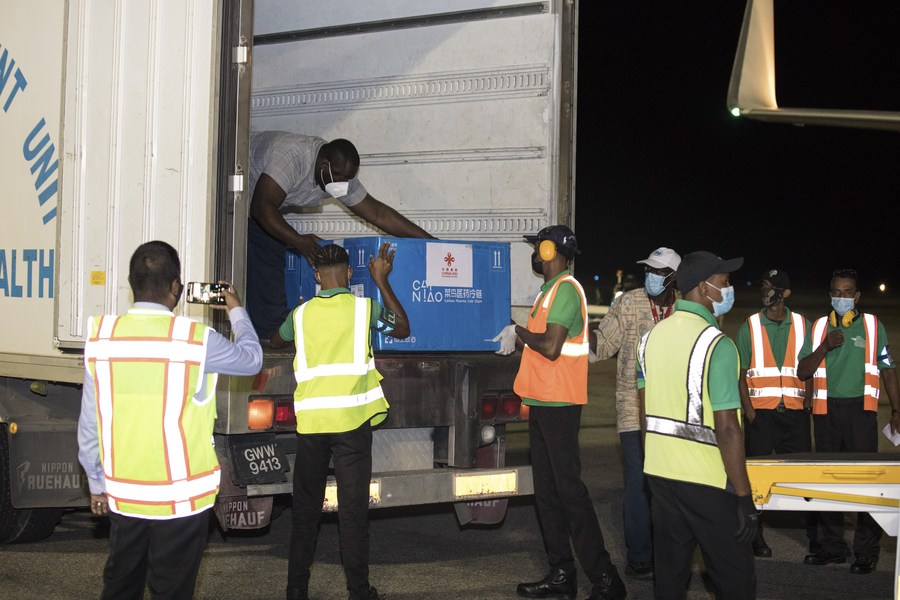 Workers load the COVID-19 vaccines donated by the Chinese government to a truck at an airport in Georgetown, capital of Guyana, March 2, 2021. (Photo: Xinhua)

BEIJING, June 27 (Xinhua) -- Chinese President Xi Jinping and his Guyanese counterpart, Irfaan Ali, exchanged congratulatory messages on Monday to celebrate the 50th anniversary of the establishment of diplomatic ties between the two countries.

Xi pointed out that since the establishment of diplomatic ties 50 years ago, China-Guyana relations have achieved significant development, with political mutual trust continuously deepened and practical cooperation yielding fruitful results.

Ever since the onset of the COVID-19 pandemic, the people of the two countries have worked together with solidarity and mutual assistance, writing a new chapter of China-Guyana friendship, he said.

Xi said he attaches great importance to the development of bilateral relations, and is willing to work with Ali to take the 50th anniversary of diplomatic ties as an opportunity to lift bilateral relations to new levels and bring benefits to the two countries and their people.

For his part, Ali said that Guyana was the first country in the English-speaking Caribbean to establish diplomatic ties with China, and that the country firmly adheres to the one-China policy.

Over the past 50 years, Guyana and China have always adhered to the principle of mutual respect, equality and mutual benefit, and the traditional friendship between the two countries has withstood the test of time, Ali said.

He added that Guyana stands ready to take the 50th anniversary of diplomatic ties as an opportunity to continuously deepen bilateral friendship.