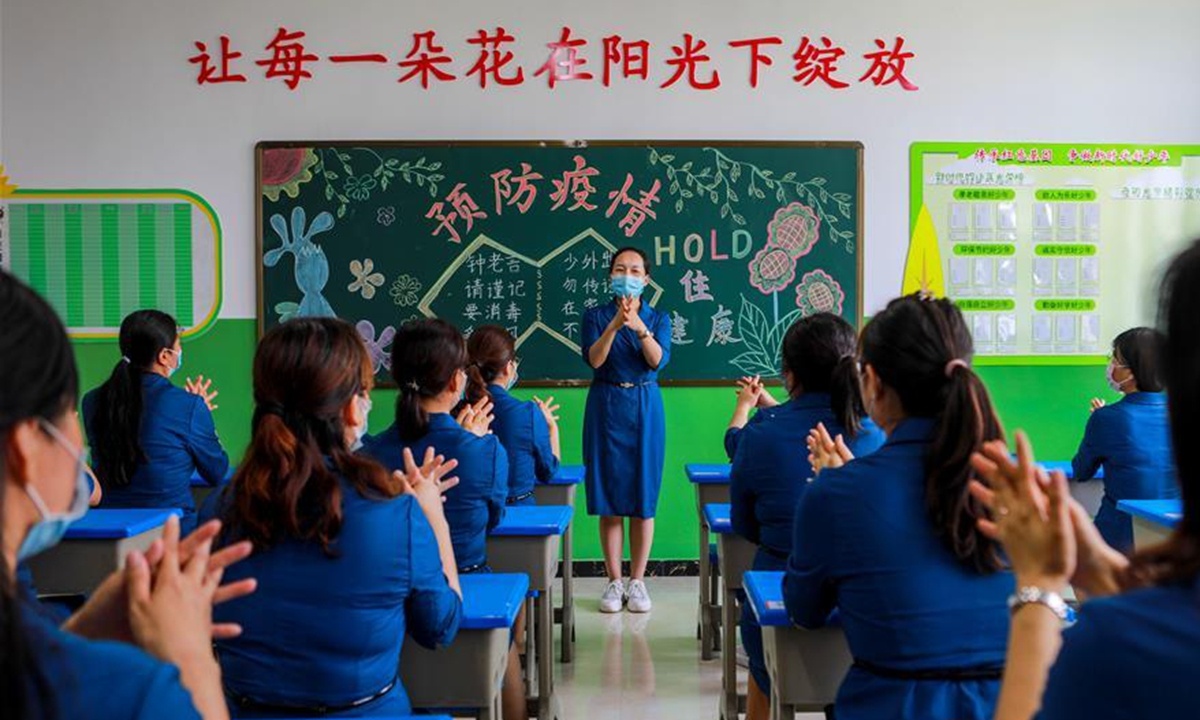 A teacher shows how to wash hands correctly during a drill at a primary school in Hanshan District of Handan, North China's Hebei Province, May 31, 2020.  (Photo: Xinhua)

The National Health Commission of China on Thursday released hygiene advice to all the country's childcare centers and schools, in a bid to limit the spread of norovirus on campuses around the country, following several mass norovirus infections reported recently.

Norovirus is highly contagious, has a long detoxification time and short immune protection time, and is susceptible to ordinary people. It may lead to possible clusters of infections in campuses, family homes, hospitals and communities with massive amounts of people, especially during its "peak season" from October to March, according to the report released by the commission on Thursday.

A total of 16 students at a senior high school in Harbin, Northeast China's Heilongjiang Province, were infected with norovirus on October 25. In addition, 16 children at a kindergarten in Dahua Yao Autonomous County, Hechi, South China's Guangxi Zhuang Autonomous Region, had reportedly suffered from vomiting and stomachache-inducing symptoms on October 21, and samples taken from them were found to have contained norovirus.

Norovirus spreads in various ways. People could be infected if they have contact with patients infected with norovirus, such as handling their vomit or feces; the virus can also be spread by contaminated food or water, said the commission's tips. New norovirus cases and silent infections could be the source of the norovirus infection.

The commission requires that all the childcare centers and schools ensure ventilation and disinfection, and those infected persons should be separated in a timely manner.

If any student is found with syndromes like vomiting, the teachers should report and evacuate other students accordingly. Those infected students can go back to school three days after making a full recovery.

The incubation period of the virus is short, however, usually only lasting 24-48 hours, with the shortest period 12 hours, and the longest 72 hours.

Maintaining good hand hygiene is the most important and effective way to prevent norovirus infections and control the spread, the commission noted.