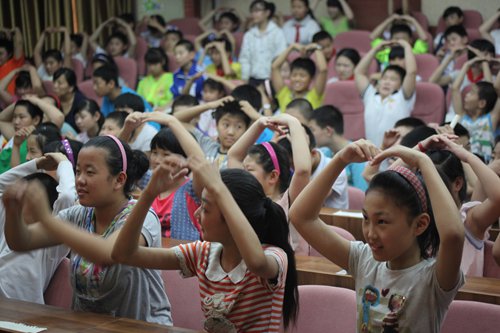 Young Chinese students learn how to protect themselves from sexual harassment in a class to publicize sex education and prevention from sexual assault at Beida Huaishu No.1 Primary School in Jinan, East Chinas Shandong Province. (Photo: IC)

A sex education game, created by seven Chinese high school students to help teach youths about handling sexual situations, has been downloaded more than 86,000 times since launching one week ago.In the game, players guide characters to make choices, such as whether a girl should sleep at a boy's home. If they choose the wrong answer, the player will be guided to a page with sex education lessons taught by students.The game, named Self-Reliance, costs 800 yuan ($118). It was produced by seven students from Shanghai High School International Division in East China's Shanghai Municipality over four months and was released on Steam, an online game platform, on February 9.Weng Anzhi, one of the developers, told the Global Times on Sunday that repeated cases of juvenile sexual assault and obscenity made his team wonder whether sexual education had been lacking, either at school or home, across China. Weng said that sex education is necessary for teenagers to learn know how to protect themselves, "and a game is the best way to attract teenagers." Weng said that before successfully launching the game on Steam, they had been refused by several game platforms because "the game's sex education theme is too sensitive." But finally, two platforms accepted their game, including Steam."The game will also be available on mobile platforms such as the App Store and TapTap," he added.According to Weng, they spent more than four months developing the game. "It took two months to prepare relevant professional knowledge about sex education, and afterwards we shot all the frames the game needs," he said."The actor and actress were often too shy to keep on performing," Weng recalled. "At one point, the actress should ask the actor whether he uses a condom before sex, but as the lines were sexually explicit, the performers spent more than 20 minutes finishing a 20-second scene."About 60 percent of young people between 15 and 24 in China have had sex before age 19, while only 10 percent consider themselves familiar with contraception and reproductive health, China National Radio reported in September 2017, citing Shen Aimei, vice-president of the Nanjing Maternity and Child Health Hospital in East China's Jiangsu Province.The youngest pregnant teenager the hospital treated between January and June of 2017 was only 13 years old and, during the same period, 141 patients under age 20 had induced abortions, according to the report.