CHINA Chinese high-speed railway: over a decade of dazzling development

Chinese high-speed railway: over a decade of dazzling development 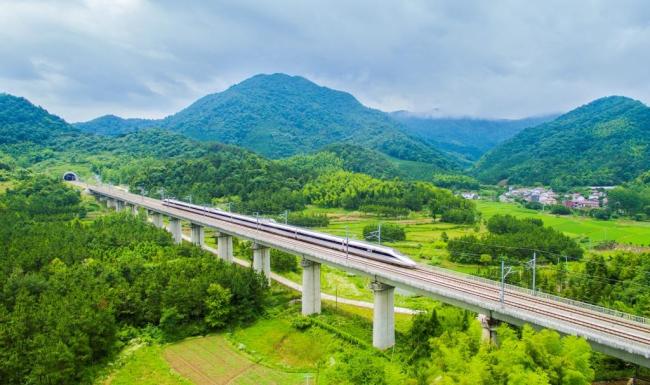 US technology tycoon Elon Musk praised the high efficiency of a Chinese railway project on his Twitter account in 2018, saying: "China's progress in advanced infrastructure is more than 100 times faster than the US."

Musk's comments came after he saw a short video depicting how some 1,500 Chinese workers had managed to upgrade a railway station by installing a new railway junction in less than nine hours.

Indeed, China has been churning out modern infrastructure projects, including railways, bridges, airports and expressways, one after another over the past several decades.

With leading technological innovation and applications, high-speed rail has become a pride of the Chinese nation and a new product and service for exports.

We're on a train travelling from Beijing to southern China. The announcement that "Smoking is strictly forbidden on this train" is one of the signs that this train is a fast one.

On traditional trains, travellers are allowed to smoke between two carriages. But on the bullet trains that travel at least 200 kilometers an hour, there's a set of new rules, including a smoking ban.

It's not just the smoking ban. The comfort, cleanliness and efficiency are telltale signs that this is not a traditional train.

Journalists are always pushed for time – so taking this more than 300 kilometres-an-hour train is great for us.

As I enjoy the fast-changing urban and countryside views, I also wonder how such modern, efficient railways came into being and how they are being so quickly popularized across China.

More than a thousand kilometers south of Beijing, workers in the county of Feixi in east China's Anhui Province are busy building a new high-speed railway line.

The workers are making precast box girders, a key part of the pile-and-girder foundation of these modern, fast railways.

The construction site belongs to the state-owned China Tiesiju Civil Engineering Group, or CTCE Group, which has been building railways at home and abroad for six decades.

Fifty-five year old Wang Chuanlin, now the Group's chief manager, has been working for the company for 32 years. His rich experience offers a useful glimpse of the development of the Chinese railway industry since the late 1980s, especially the high-speed railway.

In 1987, the then 23-year-old graduate began his association with the railway industry when he was assigned to work for the precursor of the CTCE Group.

Wang recalls with nostalgia his life and work experience in the earliest stages of his career:

"At the time I felt that this company had no fixed workplaces. Most of the places my co-workers and I went were isolated, mountainous areas. As well as Anhui Province, this job had taken me to sites in Fujian, Jiangxi and Gansu provinces. As I was young then, I personally didn't feel it was a tough life."

The CTCE Group Wang now oversees dates its history back to 1950, a year after the founding of the People's Republic of China.

In the early decades of New China, building railways was one of the key tasks for the Chinese government to modernize the country.

Wang Chuanlin says the precursor of the CTCE Group participated in the construction of many groundbreaking and technically-difficult railways from the 1950s to the early 1970s.

The Chengdu-Kunming and Baoji-Chengdu lines, for example, in the least developed western China, pass through geologically complex mountainous areas.

In the late 1980s, as Wang Chuanlin began his railway career, China had just 52,000 kilometers of railway track in service, inadequate for the increasing transport needs of freight and passengers.

As a result, railways needed to constantly be built across the country.

As a young technician, Wang always carried his measuring instruments with him so he could determine the exact lines and sites of planned railways.

The job often took him to the poor countryside and isolated villages.

He and his colleagues had to stay at the homes of local villagers, most of whom welcomed the arrival of the railway workers.

Wang vividly remembers the joy a new railway line brought to the locals:

"Every time we laid tracks for a new railway or a train began to operate on the new railroad, local residents and officials were joyous and came to witness the moment. We would be proud and felt a sense of achievement."

As a railway worker, Wang did enjoy one small privilege, some compensation for the tough work and life associated with building railways in the wilderness:

"We could take a train ride free of charge, even though that meant no seat. But we could get on a train and travel around the country to see the vast land of our nation. This experience was very precious for me."

After 17 years' working on the ground, Wang had gathered abundant technical and management experience and became an established railway engineer and manager in the 2000s. Yet new challenges lay ahead of Wang and other engineers as China sought to upgrade its train services.

Chinese designers and engineers began to study high-speed railways in the early 1990s. China's then Ministry of Railways completed a project proposal for the Beijing-Shanghai railway line in 1990 and submitted it to the National People's Congress, the country’s top legislature. This was the first time China had officially proposed a high-speed railway.

While relying on its own designers and engineers to upgrade the technology, the Chinese railway industry had also turned its eyes abroad to import cutting-edge railway technologies.

Wang Chuanlin was a key participant in the introduction of foreign railway building technologies to China.

"In 2005, the then Ministry of Railways organized Chinese railway companies to import high-speed railway technologies from Japan and Germany. The Ministry assigned the task of importing the construction technologies to our company, negotiating with a conglomerate of 11 Japanese companies," says Wang.

The talks with Japanese companies lasted for about half a year and in the end Japan agreed to sell a type of ballastless track technologies to China.

The technologies cost 100 million yuan, about 12 million US dollars.

But why the need to import technologies from Japan and Germany?

Wang says the ballastless track is a must for any train traveling at more than 250 kilometers an hour:

"When the train's speed exceeds 250 kilometers an hour, the stones under a ballast track will be sucked up by the train and hit the train's chassis. So the high-speed railway has to use a ballastless track."

The International Union of Railways identifies new lines designed for trains traveling at more than 250 kilometers an hour to be high speed.

Sometimes, existing lines can be so classified if they are upgraded to take trains traveling at more than 200 kilometres an hour.

The Paris-based organization says this highly efficient transport mode makes significant demands in terms of investment, technology, industry, the environment, and so on.

Before the application of imported high-speed railway technologies, trains on upgraded lines in China could reach 200 kilometers an hour.

But Wang Chuanlin says building brand new high-speed railways is crucial for freeing up the capacity of the existing lines for cargo transport, as well as meeting the ever-growing needs of passengers.

After buying the technologies from Japan and Germany, Chinese railway engineers and workers wasted no time studying and testing them.

"Since the founding of the People's Republic in 1949, China's railway has been developing the whole time. Before importing technologies, China carried out a lot of research itself. So we didn't start from scratch," says Wang.

Wang says railway designers, engineers and builders were careful to build the line because they hoped to test a new set of technologies for future applications on long-range tracks:

After years of construction and testing, the Beijing-Tianjin high-speed railway opened in August, 2008, just before the Beijing Olympics.

The success of the intercity line ushered in a new era of building brand new, high-standard fast railways across China.

Three years later, the country saw the opening of a more than 1,300 kilometer-long high-speed railway linking the capital city of Beijing and the economic hub of Shanghai.

In 2012, another much longer high-speed railway began serving travelers between Beijing and the southern economic powerhouse of Guangzhou.

Trains on all these lines can travel at 350 kilometers an hour. This greatly reduces travel time between these cities. Take the Beijing-Shanghai line for example, where a passenger can move between the two cities in about five hours, compared with a minimum of 15 hours on a traditional train.

As well as pace, travelling on the modern trains has been made a pleasant experience as Chinese engineers have made many improvements on the imported technologies.

Wang Chuanlin cites just one of the improvements:

According to China Railway, the country's top railway operator, China's high speed train network reached 29,000 kilometers as of the end of 2018—twice the length of the rest of the world's combined.

Currently, there are 38 high-speed lines serving the country, linking 23 provincial capitals as well as Hong Kong and Macao.

Last year alone, more than two billion trips were made on the high-speed railway, an annual increase of 16.8 percent. The trips comprised over 60 percent of the total on China's railway network.

After more than a decade of rapid development, Wang says China's railway technologies are leading the world:

And it hasn't stopped there. China's high-speed rail network is still extending, supported by advanced technology and increased investment.

In 2019 alone, 3,200 kilometers of such kind of railways will be built around the country, according to China Railway.

With more than a decade of experience in building and operating high-speed railways, Chinese engineers and builders are now continuing to challenge themselves to build projects both at home and abroad.

At the moment, CTCE Group is involved in 98 railway projects at home and abroad.

One of the projects is the Yuxi-Mohan railway in Yunnan Province, part of a planned China-Laos railway.

Figures from the top railway operator--China Railway—show that 87 percent of the 508 kilometer track are tunnels and bridges. Construction began in May, 2016, and it's scheduled to open in 2021.

CTCE Group is responsible for building eight major bridges along the Yuxi-Mohan railway.

Although the railway is not a high-speed line, Wang Chuanlin says it's still an engineering challenge for engineers and construction workers:

"The bridges are in high mountains and deep valleys. Some 40 meters of the piles are underwater in the Lancang River. The piles of the bridges are 154 meters high. The foundations are buried more than 100 meters underground. The piles are the highest in the world for any steel composite beam bridge. We face great difficulties because of the geology and our high engineering standards."

"As the Chinese government is stricter with environmental protection, we have taken this issue into consideration during our designing and building processes. We have adopted measures to minimize the harmful impact on the environment. For example, we take measures to quell the dust and recycle the waste concrete created by the building activities."

As economic and technical cooperation between China and other countries strengthens, Chinese railway companies and engineers are set to build more railways abroad in the future, as Wang Chuanlin believes.