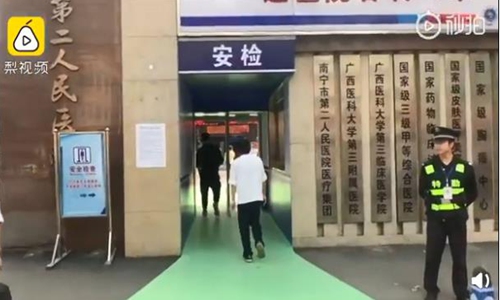 Most internet users on Chinese Twitter-like Weibo welcomed the latest policy establishing security checkpoints in the hospital, which could help ensure public security, as concerns grew after a female doctor was stabbed to death weeks ago.

A hospital employee who preferred not to be named told the Global Times on Thursday that many visitors to the hospital held a favorable attitude toward the new policy, and "it only takes about 10 seconds to pass through the gates," which is not inconvenient at all.

On the first day of operation, security at the Second Nanning People's Hospital detected a long-bladed knife and other fruit knives. Some local residents interviewed said they support this new policy and would fully cooperate for personal and hospital security.

The hospital would keep the fruit knives for the visitors and give them back when they leave the hospital, and hand the knife in custody to the local police station, said the employee.

A majority of internet users on Chinese Twitter-like Weibo praised the move, suggesting that it should be adopted by other cities and provinces across the country.

A survey conducted on Weibo showed that 92 percent of the respondents support the security check before seeing a doctor in the hospital and suggest putting it in use nationwide. A total of 163,000 users took the survey online as of press time on Thursday.

Tensions between patients and doctors have been increasing and the recent murder of a female doctor in Beijing has sparked heated discussions on violence in hospitals.

Yang Wen, a doctor of the Civil Aviation General Hospital in Beijing died on December 25, 2019 after she was slashed in the neck the previous day.

The suspect, a relative of a 95-year-old patient of Yang, was arrested and both the Chinese doctors association and Beijing health authority strongly condemned violence against healthcare practitioners.

However, some internet users said they consider installing security checkpoints at hospitals ironic and even pathetic.

"A hospital is supposed to be a place that cures and saves people. Doctors treat patients with compassion and patients respond with gratitude. It's supposed to be a very harmonious relationship, but now they're hurting each other," Zhou Pengan, a commentator with over 1 million followers, said in a post.