As the dust of the US presidential election gradually settles, Chinese in the US, with or without a citizenship, are expressing their expectations for Joe Biden to better respond to the epidemic, as well as their concerns about his strength to implement his governing strategy and revamp the US economy. 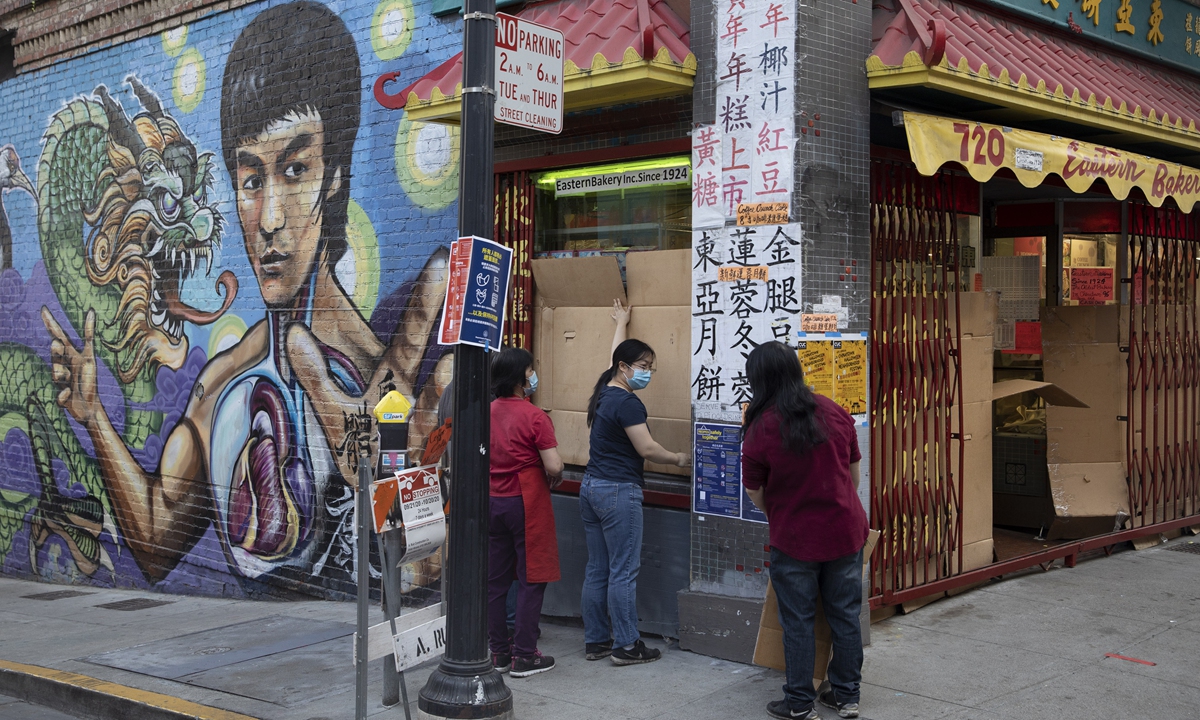 People install paperboard on the windows of their shop in the Chinatown of San Francisco before US presidential election on November 11. (Photo: cnsphoto)

Even though some of them support US President Donald Trump due to the economic growth and relatively low unemployment before the COVID-19 pandemic which they associate with his presidency, others said they have been suffering from Trump's arbitrary policy against China, expecting Biden will bring a safe and inclusive social atmosphere in US.

Tired of Trump's anti-China voice, concerned with the failure of US anti-epidemic work, disappointed with the collapse of the "American dream," Chinese in the US reached by the Global Times wished Biden would effectively control the spread of the epidemic, combat Sinophobia with a rational and inclusive attitude and not to undermine the rights and interests of Chinese immigrants.

Meanwhile, they still have concerns for Biden's administration, especially that his immigration policy may cancel limitations toward nationality, prolonging their wait time for green cards. They are also uncertain whether the current anti-China sentiment will continue or even flare up under Biden's administration as a Republican-dominated senate may continue to push for harsh bills against China.

In the election year of 2020, the US is plagued by economic recession, the COVID-19 pandemic, severe racial discrimination and political polarization.

A Chinese couple in Seattle, Washington expressed their disappointment with the failure of US anti-epidemic efforts, asking how a country can play the human right card on the global stage if it cannot protect the life of its people.

The husband surnamed Li, from Southwest China's Yunnan Province, who asked to remain anonymous, has been working as an IT engineer at a top world internet enterprise in Silicon Valley since 2017. He brought his wife to the US to pursue the "American dream" until he says Trump ruthlessly shattered it this year.

"Biden's pledge to immediately change the face of epidemic control and prevention is the change I support the most. It said on Biden's campaign website that 'the American people deserve an urgent, robust, and professional response to the growing public health and economic crisis caused by the COVID-19 outbreak.' And at least, it was reassuring to see Biden wearing a mask every time he held a rally," Li told the Global Times. 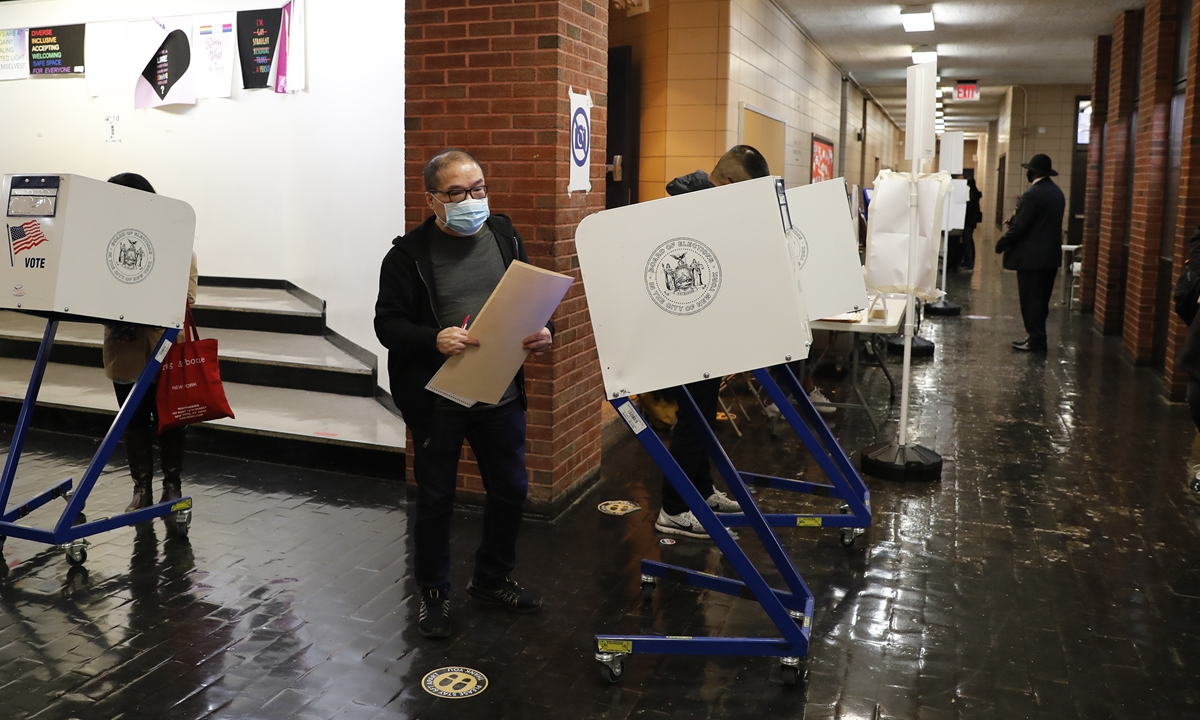 Winni Zhang, 29, a Chinese woman from East China's Shandong Province who has been living in the Los Angeles for six years, also expects Biden can effectively and scientifically control the pandemic.

Zhang said being shouted at as a "Chinese virus" on the street in the early months of 2020 is still a scar in her heart.

"It has been too difficult for me to get a work visa in the unfriendly social atmosphere against Chinese under Trump's administration. I wish Biden's immigration policy could be more equal and inclusive," Zhang said.

However, Zhang is concerned with public safety under a Democratic administration.

Democratic-leaning state California approved Proposition 47 in a referendum with a 58 percent vote in 2014. Under the bill, the theft of the $950 would be changed from a felony to a misdemeanor.

"I always have $20 cash in my pocket for robbery and never dare to walk alone in the downtown area after sunset," Zhang said noting that "If the Democrats push for looser security laws, I'll worry about my personal safety whenever I go out."

She said Trump has done some practical things during his presidency instead of merely chanting empty slogans.

"The US economy has shown an obvious growth and the stock market has had a very good performance in the past four years. Unemployment has also remained relatively low," Han said.,"

Although some of the policies and ideas Biden introduced at the presidential debates sound beneficial to middle-class Chinese-American families, Han doesn't have any idea about whether he will actually put them into practice.

Concerns toward Biden's win among Chinese in the US are also based on whether his administration will promote the S.386 bill, which increases the per-country cap on family-based immigrant visas from seven percent of the total number of visas available in a given year to 15 percent, and eliminates the seven percentage cap for employment-based immigrant visas, co-sponsored by Kamala Harris.

As the Washington Post reported, the employment green card backlog tops 800,000, and most involved Indians.

Zhao said it is actually unfair to applicants from other countries in the name of eliminating discrimination.

Some Chinese Americans reached by the Global Times said Biden and the Democratic Party can better define "American liberalism," but expressed concerns about challenges implementing his plan in a Republican-dominated Senate.

"Biden said that he was ready to lead a country reeling from the raging epidemic and the turmoil of society. It gave me new hope, it was time for the battered nation to unite and heal." Xu Deqing, a naturalized US citizen and former Chinese national living in North Haven, Connecticut told the Global Times. 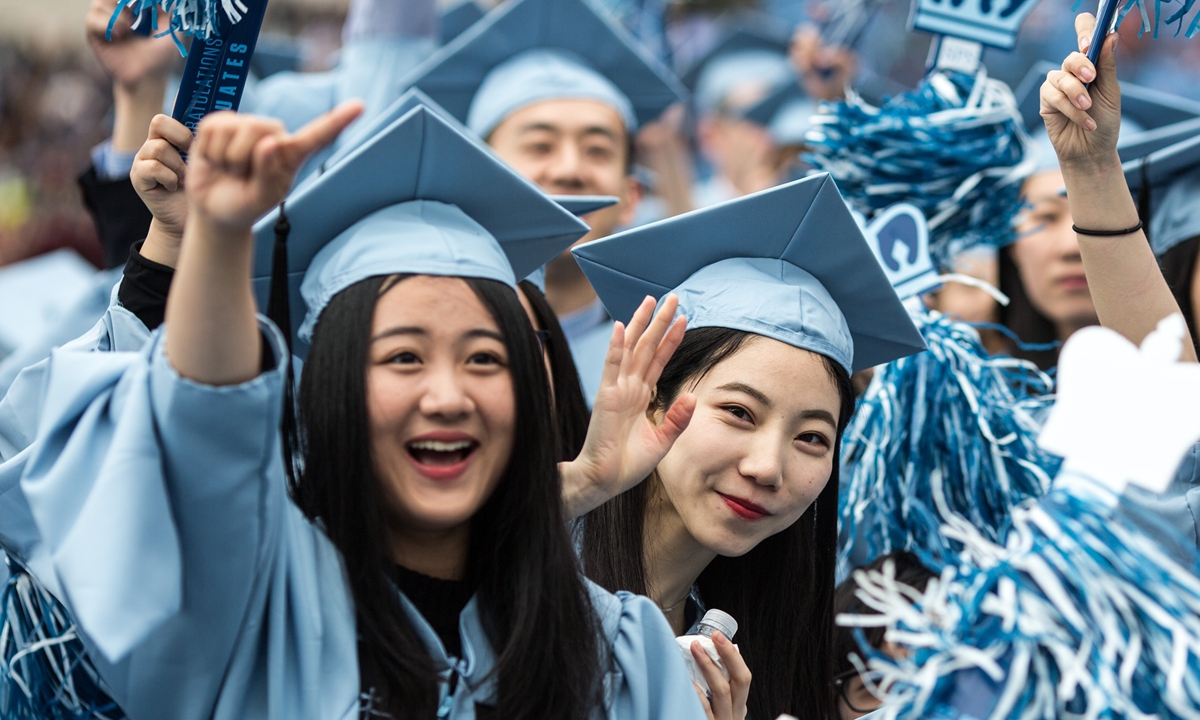 He regards Biden as a mature politician whose family background and track record enable him to take a more rational and moderate approach to the road of presidency, balancing the forces of Congress, the State Department and his party.

According to media reports, Biden comes from a blue-collar family. In 1972, he was elected to the US Senate from Delaware at the age of 29, becoming one of the youngest senators in US history. But Biden's personal life has been bumpy compared with his political career. He lost his wife and daughter at 30, suffered two life-threatening brain aneurysms, and lost his eldest son at 73.

Xu said such hardships have made Biden a compassionate and gentle character willing to make contact with underclass.

However, Xu is still wrestling with the problem of where China-US relations will go in the future.

"With China-US relations at an impasse, I hope after Biden takes office, he can lead the US to change those aggressive and extreme policies against China," Xu said.

But Xu worried there won't be many positive changes of Biden's policy toward China in the current strong anti-China atmosphere in the US, and the Republican-dominated Senate will continue to pass legislation to cement Trump's legacy on China and set various obstacles to positive changes on China-related issues.

Tang Enyang, 46, has been naturalized in the US for 20 years, living in the New York City said his hopes for Biden are tinged with concern.

"America badly needs a comprehensive set of reforms. The competition between the two parties has become more and more extreme, and the COVID-19 is still raging in the US, but the Trump administration has turned a blind eye to it, leaving the country scarred and terrified," Tang told the Global Times, saying that Biden's campaign focused on reform, with dozens of ambitious plans and agenda items reversing the Trump administration's extreme policies.

According to CNN, Biden's transition team has already organized a COVID-19 task force, keeping close communication with governors, the private sector and the medical community to prepare its response including pandemic-related legislation and vaccine distribution.

But Tang also noted that Biden's team has a lot of plans and implementing them all could be a challenge, especially since the US Senate race is currently locked in a stalemate. The Financial Times predicted that barring serious disruption, Republicans will retain control of the Senate. The Associated Press also commented that Biden's agenda will face a divided Congress.

"Biden's ability to advance an ambitious agenda will be constrained," Tang said.