A former carpenter from Wuhu, Anhui Province, with no previous medical knowledge has won recognition from Bill Gates for a male circumcision device that he invented.

The device, which is named the ShangRing after its inventor Shang Jianzhong, also earned prequalification from the World Health Organization, a rare achievement among Chinese inventors. It is now being widely used by doctors in the frontline of the battle against HIV/AIDS in Africa, where the disease remains a serious health challenge. 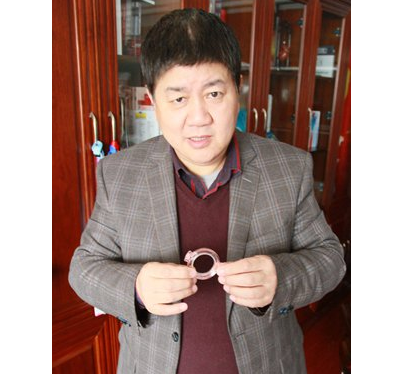 According to Shang, randomized trials in Africa showed that male circumcision contributed to the reduction of HIV acquisition in men by approximately 60 percent. Shang told the Global Times that 1.2 million people will use the ShangRing in African countries including Zambia, Kenya and Uganda this year. Some local governments in Africa are also working with Shang to promote the use of the device. "The meaning of ShangRing lies both in its role in combating HIV/AIDS and as a symbol of China's innovation going global," the 62-year-old told the Global Times. On Tuesday, Shang donated 10,000 sets of ShangRing to 10 African countries at the Reproductive Health Supplies Coalition's 18th General Membership Meeting. The ShangRing is made up of two plastic rings that sandwich the foreskin. The whole process avoids suturing, resulting in minimal bleeding and reducing complications after surgery. "The operation is as easy as having a coffee," he said. Gaining recognition When Shang himself was circumcised back in 2002, it was a traumatic experience. At that time, the procedure was being widely promoted on TV and billboards that claimed the surgery was pain-free and easy to recover from, but Shang found himself bedridden for more than two weeks and in great agony. He asked himself why a simple circumcision procedure was so painful when the world's medical technology was so advanced. As he lay in bed, he decided to bring about a change. Using his early working experience as a carpenter and later in Wuhu's mapping and surveying office, Shang devoted his time to perfecting what would become the ShangRing.For Shang, drawing up the plans for the device was an easy task. To alleviate patients' pain, the key is to avoid sewing of wounds. He then came up with the idea of using two concentric plastic rings that would let the foreskin fall off naturally. After successfully testing it on animals, he tried to sell his idea to doctors. Compared with traditional circumcision methods, which can take half an hour, the ShangRing can reduce the operation time to five minutes in clinics. The patient only needs to return one week after the operation to have the device removed. From 2003 to 2005, Shang traveled from Wuhu to Beijing 80 times in search of investors to commercialize the ShangRing, but without success.However, Shang said he had a strong faith at the time that the ShangRing could become a market success, so he quit his job and started his own company. The turning point came when Philip Li, a doctor and professor of urology at Cornell University who believed in the ShangRing's medical value, got in touch with Shang.It's reported that Li and his colleagues conducted a series of clinical trials and research into the ShangRing for years in China and Africa. The trials demonstrated that the ShangRing is highly effective in lowering the HIV/AIDS infection risk. Li published papers in international journals that further testified to the medical value of the ShangRing. Meanwhile, the invention also attracted the attention of the Bill & Melinda Gates Foundation. In 2012, Bill Gates lauded ShangRing for being an innovative solution to a complicated health problem, and promoted it in a public speech. Supported by the Gates Foundation, ShangRing was then used in a wide range of clinical trials in a number of African countries. Shang said that the ring has been very well received by African men, who generally have a strong willingness to accept circumcision.The Joint UN Programme on HIV/AIDS revealed that 36.9 million people were living with HIV globally in 2014, of whom 70 percent lived in sub-Saharan Africa.In 2015, the WHO authorized the prequalification of the ShangRing, as it meets acceptable international standards of safety, quality and efficacy, marking a breakthrough in Chinese medical invention.  According to Shang, he also arranges for African doctors to come to China to undergo short-term study on using the ShangRing every year. Eyeing the future  While it is popular in Africa, Shang has been disappointed to find that his invention is not receiving the attention he believes it deserves back in his own country.He stressed to the Global Times that there are many counterfeit manufacturers in China and the market is in chaos. His company often has to file lawsuits against copycat companies, but the compensation he receives from winning his lawsuits does not come close to the losses he has suffered in the Chinese market. Also, Chinese men are generally much less willing to be circumcised than men in many Southeast and East Asian countries, including South Korea and Japan.Shang explained that this is partly because China does not have a tradition of circumcision, and the roughly 1,000 yuan surgery fee prohibits many people from undergoing the procedure. But the situation does seem to be improving in China's big cities. "Now, many families are willing to spend the money for their young sons to be circumcised," he said.He said that in the future, he hopes the ring will be able to reach a wide domestic market, which he stressed needs to do more to protect the rights of inventors like him.He also suggested that the surgery fee for circumcision be covered by medical insurance and called for more media coverage of related health knowledge.