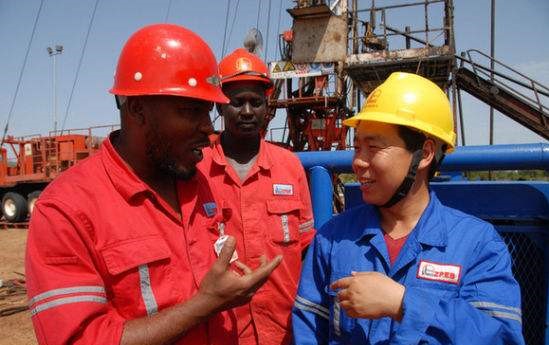 Statistics show that it is groundless to say that China is “pillaging” Africa and increasing debt burden in the region, according to a Chinese expert who has researched China’s investment to Africa and the African economy.

China’s investment in Africa covers a wide range of areas instead of focusing only on the resources and energy sector, said Liu Qinghai, head of the Center for African Economic Studies at the Institute of African Studies at Zhejiang Normal University. Liu is also a visiting scholar of the China-Africa Research Initiative at Johns Hopkins’ School of Advanced International Studies.

Over the same period, China’s investment in Europe totaled $87.2 billion, while mining, manufacturing, and finance were ranked as the top three most invested industries.

According to statistics from the US Department of Commerce, the top 3 sectors in US OFDI in Africa at the end of 2015 were mining, holding companies (non-banking), and manufacturing at 66 percent, 14 percent and 7 percent, respectively.

It’s clear from the data that mining occupies a major share of the US’ direct investment into Africa, outpacing China’s investments in the same sector.

Between 2000 and 2014, the top four African business sectors that received Chinese loans were transportation at 28 percent, energy at 20 percent, mining at 10 percent, and communication at 8 percent, according to research from the China-Africa Research Initiative at the Johns Hopkins School of Advanced International Studies (SAIS-CARI).

In 2015, the top 3 sectors financed by Chinese loans were transportation $4.6 billion, power at $4.5 billion, and industry at $ 700 million. Mining did not receive any Chinese financing. It’s also worth noting that more Chinese loans went to Ethiopia, Kenya, Uganda, Senegal, Djibouti, and Cameroon, which are not resource-rich countries.

As a resource-poor country, Ethiopia was Africa’s 2nd largest recipient of Chinese financing. Between 2000 and 2016, Ethiopia received $13.3 billion in Chinese loans, 35 percent of which went to transportation and 24 percent went to the energy sector.

China provided loan assistance to Ethiopia for the construction of industrial parks such as the Eastern Industry Zone and the Huajian International Shoe City.

The country has also carried out a series of human resource development projects in Africa since the 1950s, and relevant projects saw a substantial growth after the Forum on China-Africa Cooperation was founded in 2000, said Liu.

The number of African students studying in China rose from 2,000 in 2003 to 61,594 in 2016, an over 30-fold increase, according to China’s Ministry of Education. In 2014, China became the second most popular destination for overseas studies in Africa after France.

“China gave priority to infrastructure and human resources development rather than exploring the mineral resources as some imagined,” Liu said. “The Chinese investment has promoted Africa’s sustainable development.”

She said that it is “unfair to accuse China of ‘pillaging’ Africa’s natural resources” and that claims that China has increased debt burden in Africa are “groundless.”

Liu said that conclusion can be supported by the proportion of China’s loans to Africa to the latter’s total external debt, the influence of the loans on Africa’s GDP, and the scale of the latter’s debts

Africa’s debt increased after the sovereign bonds were issued in 2006.

Statistics by the World Bank show that Africa’s external debt reached $601 billion in 2016.

Some African countries’ foreign debt had exceeded half of their gross national income by the end of 2016. A total of 13 African countries were in heavy debt, among which only the Republic of Congo and Ghana received more loans from China.

Angola, Ethiopia, and Kenya, which received the most loans from China, had a lower debt burden compared with other African countries.

In fact, Chinese loans have boosted the African countries’ GDP growth in multiple ways, Liu said, adding that the loans were mainly used in Africa’s infrastructure construction and the manufacturing industry.

In that way, they have helped African countries reduce costs in infrastructure construction and create many jobs, Liu said.

“The Chinese loans to Africa account for small share of the region’s total foreign debts,” Liu said. “With the infrastructure in Africa improved, the money from China has played a positive role in reducing debts of African countries and promoting the GDP growth. Obviously, it’s ill-founded to say China added to Africa’s debt burden.”