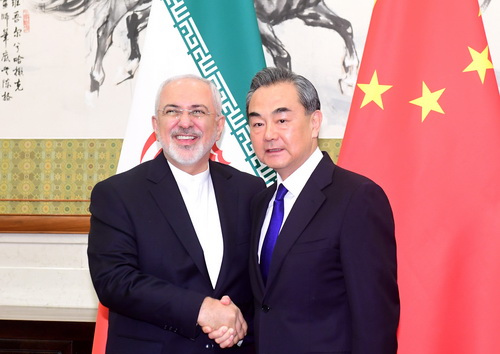 Wang extended condolences to the victims of the latest terrorist attack in Iran, and strongly condemned it.

Speaking of Iran's nuke issue, Wang said that China supports Iran to defend its own legitimate rights, opposes unilateralism and hegemonic moves, and calls for upholding the comprehensive deal on Iran's nuke issue.

He said that China encourages all the parties concerned to take a right stand on this issue, and appreciates the International Atomic Energy Agency (IAEA)'s recognition that Iran has fulfilled its obligation under the deal.

Wang added that it is in the interests of Iran to continue implementing the deal.

Zarif spoke highly of China's important role in upholding the international nuclear deal on Iran's nuclear issue, also known as the Joint Comprehensive Plan of Action (JCPOA), noting that Iran believes most members of the international community would continue to support the deal.

Iran is willing to maintain communication with China and other nations on the preservation and implementation of this deal, so as to properly handle the current situation, he said.

He also said that Iran values its ties with China and appreciates China's efforts to promote bilateral economic and trade cooperation.