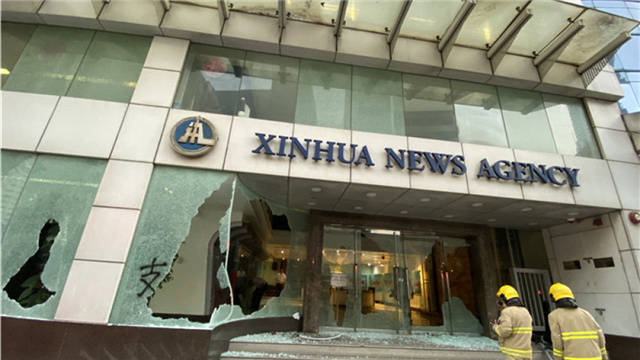 A view of the smashed glass doors of the office building of the Asia-Pacific Regional Bureau of Xinhua News Agency after the violence, November 2, 2019. (Photo: CCTV)

The All-China Journalists Association (ACJA) Sunday voiced strong indignation and condemnation over rioters' attack on the office building of the Asia-Pacific Regional Bureau of Xinhua News Agency on Saturday.

A group of black-clad rioters vandalized and set fire to the office building on Saturday afternoon following an unlawful assembly held on Hong Kong Island.

In a statement, the association said the radical rioters' savage acts constitute a blatant violation of press freedom and the rule of law as well as serious damage to social order in Hong Kong.

Stressing that vandalism acts should be severely punished by the law, the association strongly urged police to track down and arrest the rioters involved in the incident, in order to ensure a fair, just, free, and democratic working environment for news organizations and journalists.

The ACJA also expressed its sincere condolences to the journalists who stuck to their posts and contributed to the stability and development of Hong Kong.

"We firmly support the Hong Kong Special Administrative Region (SAR) government and the police in stopping violence and curbing chaos in accordance with the law," said the agency's spokesperson.

The Hong Kong News Executives' Association issued a statement condemning the violent acts and urging the police to take strict measures to ensure the regular operation of news organizations.

The attacks launched by rioters were a serious provocation to the state media institution and a wanton violation of the freedom of the press in Hong Kong, said the federation.