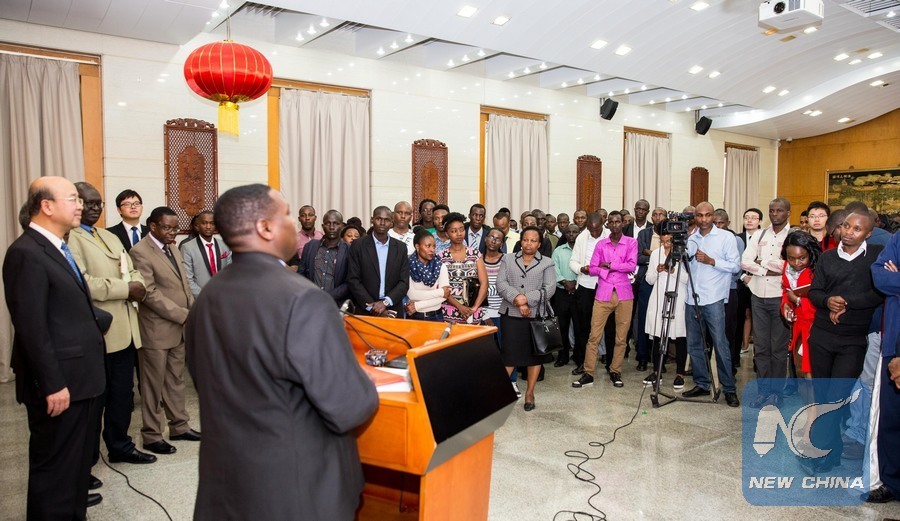 More and more Kenyan youth and budding entrepreneurs are studying Chinese in the hope the language will open new opportunities, experts told Xinhua during an interview to mark the UN Chinese Language Day on Friday.

Franklin Asira, Chairman of Sino Africa Cultural Exchange Association that was recently launched in Nairobi, said that uptake of Chinese language in Kenya will accelerate in light of blossoming economic and cultural ties between Nairobi and Beijing.

"The Chinese language is spoken by one third of the global population and I see it spreading fast in Kenya and the entire African continent," said Asira.

"It is a language that will open doors to Kenyans who have embraced it with passion," he added.

The computer engineering major studied at two universities in Beijing in the late 1980s, where his mastery of spoken and written Chinese language was refined.

Asira said he was optimistic that the uptake of Chinese language in Kenyan and African academic institutions could soon eclipse other foreign languages, given Beijing's expanding footprint in the continent's socio-economic and cultural spheres.

"Chinese investments in Kenya are growing and will create jobs for people who understand and can speak the language. There will be job openings across East Africa for locals who have studied Chinese language," Asira told Xinhua.

He noted that Africa's learning institutions are keen on introducing Chinese language in their curriculum as Beijing becomes the continent's leading source of trade and investments.

Kenya's four fully fledged Confucius Institutes that are domiciled in the country's oldest public universities have provided a platform for the country's youth to study mandarin at basic and advanced levels.

Xiao Shan, director of University of Nairobi's Confucius Institute, said the enthusiasm by Kenyan youth to master the Chinese language and culture is unmatched in the region.

She revealed the Confucius Institute at one of Kenya's oldest universities has enrolled over 5,000 students with its activities reaching about 10,000 locals, and plans are in the pipeline to introduce mandarin classes on satellite campuses.

Kenyan youth have developed a passion for the Chinese language, arts and culture given the positive contribution Beijing is making in their country.

Leah Adhiambo Ombuor, a 21-year-old student at the University of Nairobi, said enrolling for a certificate course in mandarin eight months ago was informed by her love for China's rich culture.

Mwika Kiarie, an anthropologist major at the University of Nairobi who has also enrolled for a certificate course in Chinese language, hopes to become a bridge for Sino-Kenyan relations in diverse spheres.

"I look forward to becoming the bridge between Chinese and Kenyan business people through performing tasks like translation, logistics and even humanitarian affairs," Kiarie told Xinhua.

He added that a major in anthropology has increased his desire to master foreign languages and cultures.

Chinese entrepreneurs are promoting the study of mandarin to Kenyan children and youth through the establishment of learning facilities in major cities.

Liu Yun, the Director of Nairobi-based China Kenya Cultural education Center, said that Chinese language courses that are affordable and tailor made for local youth have gained popularity.

Kenyan children and youth are interested in learning the Chinese language, said Liu, noting that Chinese dance, martial arts and musical instruments have struck a chord with them.

"We also want more adults to learn Chinese language and improve their chances of getting a job," she added.