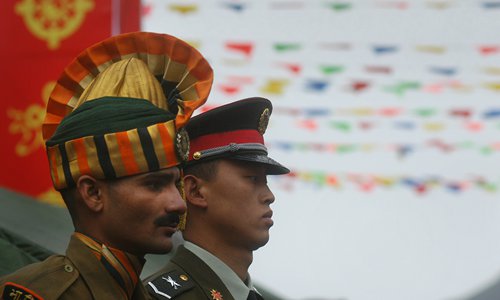 An Indian soldier and a Chinese soldier stand side by side on the border at Nathu La Pass in Tibet. Photo: VCG

Indian police and soldiers stationed along the Sino-Indian border have been learning Chinese since 2017, which India believes will help it seize the initiative in possible future border clashes with China, experts said. A total of 25 Indo-Tibetan border police (ITBP) will attend a one-year Chinese language course in India's Sanchi University of Buddhist-Indic Studies in July, the Press Trust of India (PTI) reported on February 25. The PTI said that the course will help soldiers posted at the Sino-Indian border to communicate with their Chinese counterparts.The course books come in three languages - Hindi, English and Chinese - so that students can understand the text easily, and the same pictures are used alongside the texts in all three languages."In the 2016-17 academic session, four ITBP personnel had completed the one-year certificate course in the Chinese language. Subsequently, they have been performing their duties at the borders," the PTI quoted registrar of Sanchi University, Rajesh Gupta, as saying. Indian media started reporting on its border soldiers learning Chinese in early 2017, several months after the Doklam military standoff. Chinese experts said Indian soldiers acquiring Chinese language skills could help reduce misunderstandings with the Chinese side and prevent crises like the Doklam standoff, but more significantly, the language ability could become an effective weapon for India if the two countries are involved in a hostile confrontation. More coursesAnother Indian university, the Visva-Bharati University, also started offering Chinese courses for Indian soldiers in 2017, with 25 soldiers admitted to the course last year. According to a PTI report in May 2017, the officiating vice-chancellor of the university, Swapan Kumar Dutta, said that the certificate course in Chinese would teach soldiers about China's rich culture and the centuries-old ties between the two nations. The Indian army's Eastern Command has established an advanced Chinese language training laboratory at Penagarh for soldiers deployed along the Line of Actual Control, UK's Daily Mail reported in February 2017, quoting a senior Indian army official. According to the Daily Mail report, the new facility can train 125 students annually, and the army also provides facilities including Chinese learning software, a library and Chinese TV channels to troops. The language training aims to make soldiers more confident in holding routine conversations in Chinese during border personnel meets, flag meetings and border talks. Selected soldiers will also act as interpreters during visits by high-level delegations, the Daily Mail reported. The series of Chinese learning programs for Indian troops was launched after the Doklam standoff at the request of Indian union home minister Rajnath Singh, who said that every border soldier should know basic Mandarin so that they don't face language issues at the border during face-offs with the Chinese, according to PTI. Song Zhongping, a military expert and TV commentator, told the Global Times that Indian troops' learning Chinese could prevent misunderstandings and is conducive to peace and stability on borders, but would also have a greater significance during war. Understanding the Chinese language and culture could greatly help India take control of border areas in a confrontation, thus, strengthening language learning is a form of strategic preparation, Song said. Echoing Song, Hu Zhiyong, a research fellow at the Institute of International Relations of the Shanghai Academy of Social Sciences, told the Global Times that Indian troops could also monitor Chinese soldiers on the China-India border, and seize the initiative in future border clashes by learning Chinese. "India could come up with effective and targeted strategies once their troops can correctly grasp what their Chinese counterparts mean during war," Hu said. "Language ability can boost communication in peacetime, but in wartime, it is a weapon," Hu said. Provocative moves Chinese experts warned that China should prepare for possibly more border clashes with India this year, as it has been sending provocative signals to China since the Doklam standoff in 2017. The Indian government is planning to add 15 new battalions in the country's border force, a move that will fortify defenses along its strategic frontiers with Pakistan, Bangladesh and China, the Times of India reported in January. Indian Prime Minister Narendra Modi visited the so-called Arunachal Pradesh in February. In response, Chinese Foreign Ministry spokesperson Geng Shuang said on February 15 that China is firmly opposed to the Indian leader's visit to the disputed area and would lodge stern representations with the Indian side.It's not just Indian troops, but also the much wider Indian population that is learning Chinese, as India is both jealous and under pressure from China's growing global competitiveness, Hu said.