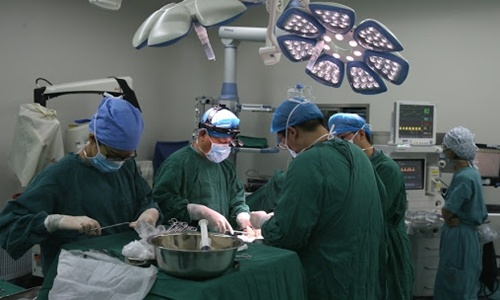 The proposal was brought by Chen Jingyu, a cardiothoracic surgery expert and vice president of Wuxi People's Hospital in east China's Jiangsu Province, and also a deputy of the 13th National People's Congress (NPC).

He told the Global Times that China's organ donation rate is already top among Asian countries, with around five out of one million people willing to donate their organs after death.

However, the rate is still low considering the huge demand for organs in China, according to Chen, pointing out that there are 300,000 people who are in need of organs, of whom only about 20,000 will be lucky enough to get them.

Chen said that although the National Health Commission already included organ donation rate in the evaluation criteria for top Chinese hospitals, it is far from enough. Elevating donation rates needs the whole of society to push it forward, said Chen.

The evaluation of a civilized city states that residents' satisfaction for organ donation has to be more than 50 percent. However, Chen believed it is hard to quantify such feelings, and suggested including the organ donation rate into the criteria for evaluating if a city is civilized enough.

He believed the benchmark for a civilized city candidate is for it to surpass the previous year's national average rate of organ donations.

Chen said if the proposal is adopted, China's national influence will be further elevated and will serve as a strong rebuttal to international smearing of China's organ donation sector.

Chen made the proposal ahead of the 13th NPC, which will be convened on Friday.

A total of 24,112 Chinese donors donated their organs after death from January 2015 to December 2019, according to a report from the China Organ Transplantation Development Foundation issued in December last year.

At least six COVID-19 patients in critical condition have undergone lung transplants in China as a final option, with medical costs totaling more than 7 million yuan ($1.1 million), which were covered by the government.

Huang Jiefu, head of the China National Organ Donation and Transplantation Committee and chairman of the China Organ Transplantation Development Foundation, told the Global Times previously that organ donation is widely recognized and supported by the public, adding that patients suffering from organ failure cannot wait, so operations were not suspended in China even against the backdrop of the epidemic.