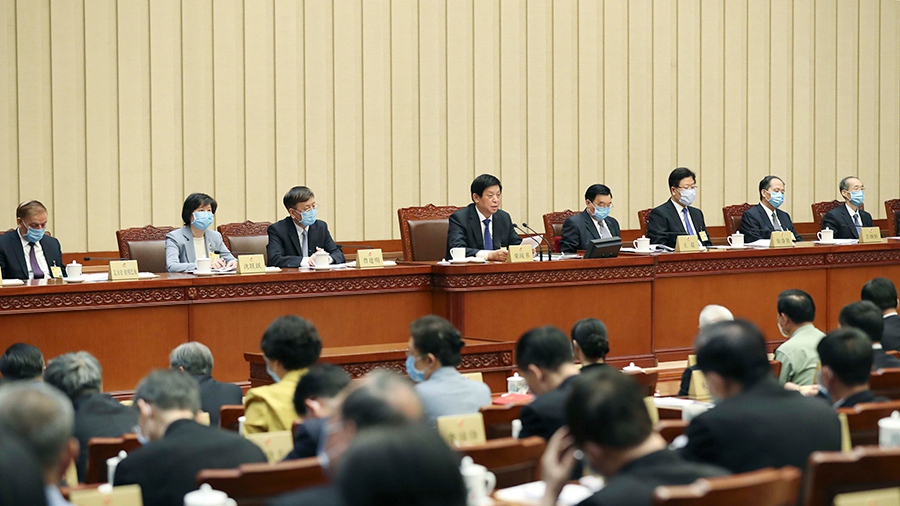 The Standing Committee of the National People's Congress (NPC), China's top legislature, met on Monday in Beijing to prepare for the upcoming NPC annual session.
Li Zhanshu, chairman of the NPC Standing Committee, presided over meetings of Monday's session.
At the closing meeting, Li said the third session of the 13th NPC is an important gathering at a time when global COVID-19 pandemic remains grim and complex, while major strategic achievements have been made by China in curbing the coronavirus.
To convene the session successfully will be of great significance to overcoming the negative impact of the COVID-19 pandemic, securing a decisive victory in the fight against poverty and building a moderately prosperous society in all respects, Li said.
Li called for all-out efforts to accomplish various tasks of the annual session, while adopting effective containment measures.
The NPC annual session, after being postponed for more than two months due to COVID-19, will open on May 22. The 13th NPC has 2,957 deputies.

Lawmakers on Monday approved in principle a work report of the NPC Standing Committee, and entrusted Li to deliver the report to the NPC annual session on behalf of the committee.
Lawmakers voted to approve a draft agenda of the NPC annual session and a draft name list of the session's presidium and secretary-general, and decided to submit the drafts to the preparatory meeting of the annual session for review. They also voted on deputy qualifications and personnel matters.
On Monday, Li also chaired meetings of the Council of Chairpersons of the NPC Standing Committee and attended group deliberations.
During group deliberations, lawmakers lauded the NPC Standing Committee's work over the course of more than a year, including its initiation of legislation to strengthen legal safeguards for public health after the outbreak of the COVID-19 pandemic.
Lawmakers vowed to focus on the targets of poverty eradication and building a moderately prosperous society in all respects to advance the work of the legislature.

The NPC session is part of China's annual Two Sessions, alongside the session of the country's top political advisory body – the Chinese People's Political Consultative Conference, or CPPCC, which will convene on May 21.