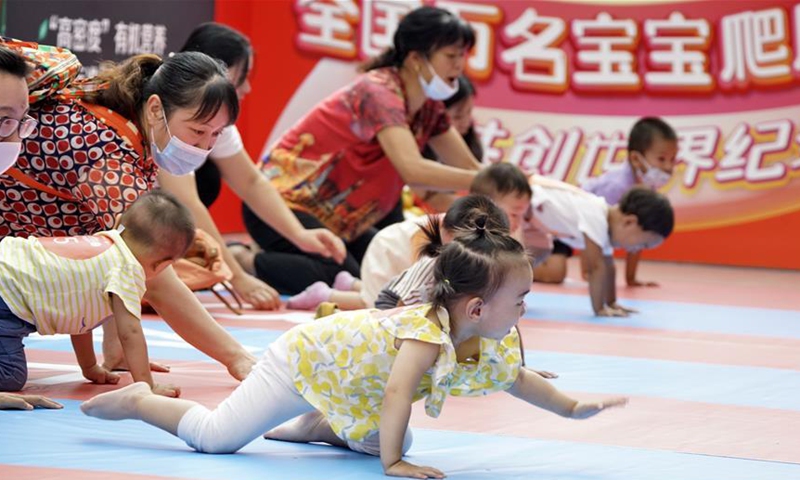 Parents and their babies participate in a baby crawling contest at a shopping center in Daxing District, Beijing, capital of China, Sept. 13, 2020. (File photo: Xinhua)

China's top legislature is deliberating on a legal amendment that will allow couples to have three children, marking a key move to legalize a policy announced recently to tackle the nation's aging-population challenge.

The draft amendment to the Population and Family Planning Law also removes restrictions and penalties related to new births, while proposing supportive measures aimed at reducing the cost of raising children and encouraging births.

The draft was submitted to an ongoing session of the Standing Committee of the National People's Congress for its first reading on Tuesday. In China, a draft law is normally reviewed at least three times before being passed.

The Population and Family Planning Law was enacted in 2002 and revised in 2015, when the universal second-child policy was implemented.

Yu Xuejun, vice-minister of the National Health Commission, said during the session that revisions to the law are needed to cope with new circumstances in social and economic development, and promote balanced long-term population development.

The latest census released in May, showed China's population growing at a slower rate over the past decade, with an expanding trend of an aging population and declining fertility rates.

On May 31, a key meeting of the Political Bureau of the Communist Party of China Central Committee announced that all couples will be allowed to have up to three children.

In a document published in late July, central authorities set out a number of supportive policies to make it more affordable for couples to raise and educate children. Many of the policies are stipulated in the draft amendment.

The draft says that governments above the county level should take comprehensive measures to promote establishment of subsidized nursery care services, and boost accessibility and equity of such services for all families with babies.

It also requires local governments to set up sufficient public facilities to cater for infants and young children when building or revamping communities. Public areas and institutions employing a large number of female workers should also set up nursery services.

Some regions will be encouraged to explore the establishment of child care leave, according to the draft.

Tougher punishment for violations in the nursery care sector is also stipulated. Nurseries found in severe violation of regulations or standards will face fines of up to 100,000 yuan ($15,400).

People who abuse infants and children will be barred from the sector for life and could face criminal investigation.

The draft also proposes stronger elderly care support for seniors who have abided by the now-defunct one-child policy. Couples whose only child has died or is disabled should receive comprehensive care provided by local governments.

The NPC's Education, Science, Culture and Public Health Committee, which reviewed the draft, suggested improvements be made in boosting assistance to bereaved parents.

Zhi Zhenfeng, a researcher at the Chinese Academy of Social Sciences' Institute of Law, told Legal Daily that it is necessary to legalize new population policies through legal procedures in order to ensure implementation of decisions made by the central authorities and protect the rights of the public.

The draft should cover a wide range of public services that can help foster a "fertility friendly" society, he added.