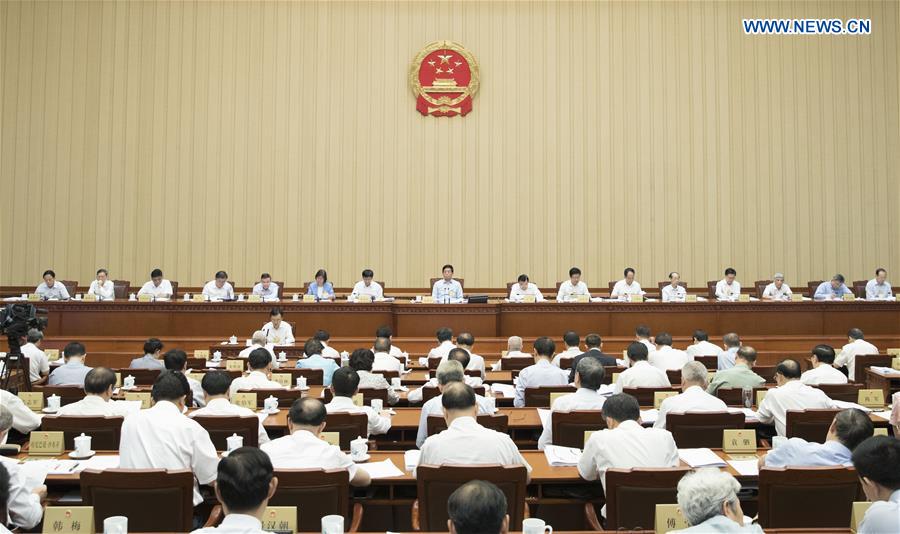 A session of the 13th National People's Congress (NPC) Standing Committee is held at the Great Hall of the People in Beijing, capital of China, July 9, 2018. Li Zhanshu, chairman of the NPC Standing Committee, presided over the session and delivered a report on the implementation of the Air Pollution Control Law. (Photo: Xinhua)

Chinese lawmakers on Monday voiced their support for a report on the implementation of the Air Pollution Control Law during panel discussions at the ongoing session of the National People's Congress (NPC) Standing Committee.

Li Zhanshu, chairman of the NPC Standing Committee, delivered the report and attended the panel discussions.

The NPC Standing Committee sent four teams to the country's eight provincial-level regions to check the implementation of the Air Pollution Control Law from May to June. They also entrusted local legislatures in the other 23 provincial-level areas with law enforcement inspection.

The law enforcement inspection, prioritized by the 13th NPC Standing Committee, is conducive to promoting the implementation of the major decisions and plans of the Communist Party of China (CPC) Central Committee, ensuring the comprehensive, effective law enforcement, and solving prominent environmental problems of public concern, said the lawmakers.

During the panel discussions, legislators also reviewed a draft decision on strengthening the comprehensive protection of the environment and supporting the fight against pollution in accordance with the law.

The decision is a practical action by the NPC Standing Committee to implement the major decisions and plans of the CPC Central Committee and make contributions to prevent and control pollution, lawmakers noted.