Chinese legal scholar in the starting lineup of the World Cup 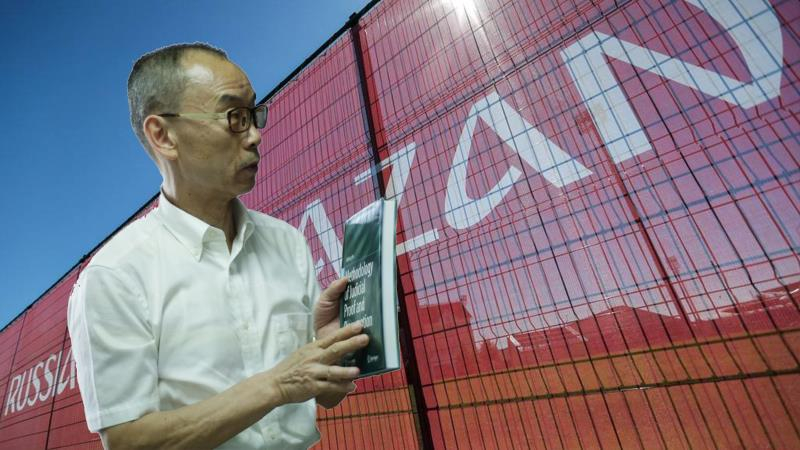 Legal scholar He Jiahong is a member of the FIFA World Cup governing bodies. (Photo: CGTN)

When the 2018 World Cup gets underway in Russia on Thursday, one of the senior FIFA officials in attendance will be an international legal expert and scholar from Renmin University of China in Beijing.

He Jiahong serves on the Independent Ethics Committee of FIFA, one of the organization’s three judicial bodies.

“In February of last year, the chairperson of the Chinese Football Association called me and said FIFA was accepting candidates for the membership of the independent agencies of FIFA. So all the national organizations would propose candidates,” He told CGTN Digital.

CGTN Digital spoke with him on Friday just before he left for the World Cup.

“I like sports. I was a good fit for them,” he said. “They were looking for someone who is an internationally well-known expert and like sports.” He has often given commentary about sports on national media in China.

He was elected to the FIFA judicial body last May and made his first trip to a meeting in the fall in Zurich.

“As a member of the Ethics committee I am a senior official for FIFA and get invited to the opening ceremony of the World Cup,” He said.

He will also attend the opening match but would not reveal if he was rooting for any particular team.

“I’m not a fan either,” He told CGTN Digital. “I will just go to watch the game.”

He said his love of sports dates back to his childhood. The Beijing native said he has always been an avid sportsman.

“I like football when I was young. I played football. Just played for fun obviously I was not good,” He grinned. “But I play badminton regularly.”

In fact, He was watching the clock during our interview because the 65-year-old did not want to be late for badminton tournament being held on the university campus.

He said before the Cultural Revolution he was sent to northeastern China – Heilongjiang Province to work on a farm.

“I worked on the farm for eight years basically as a tractor driver,” he said. “There were some frustrations, the hard work, and cold weather.”

But not all was bad on that farm for He.

"A young lady changed my life. I fell in love with a young lady at the construction company. She was a medical doctor that worked in the clinic. But we had a problem. Her parents thought I couldn't match her. I was a plumber. I had nothing," He recalled. "Several months later her parents said if this guy could pass the national examination for university they would agree to meet him."

He said they didn't think he would make it but he did and they agreed to meet him.

He has been married to that young doctor for 37 years.

Not one to rest on his laurels, the internationally known legal scholar and FIFA official is also an author. He has written five popular crime novels including “Crime of Blood” – an international hit that has been translated into several languages including English with the title “Hanging Devils: Hong Jun Investigates.”

“I was a visiting scholar in France when a French lady studying wanted to write her dissertation on my novel,” He said. “A year later she sent me a copy of her dissertation. Then she told me in the letter that a French publisher was interested in my novel.”

Despite multiple requests, He has not released a book in more than a decade. His reason is the same reason why he will only stay in Moscow for the opening ceremony and first match.

“If I wanted to stay FIFA would arrange,” He said. “But I have to come back to Beijing I have many obligations as a law professor.”

Another glance at his watch and our interview was over so that He could be on time for his other "obligation" that day – a badminton tournament.

"I'm the leader of the law school team although I am very old," He said.