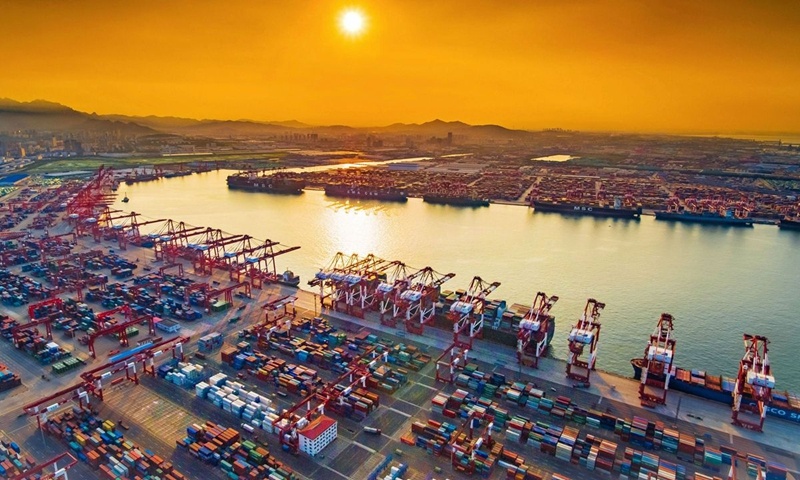 The Chinese civil aviation sector, ports and freight transportation agencies have escalated measures for imported shipments to minimize the risk of infection, given recent cases showing the coronavirus has spread from cold-chain storage facilities and cargo transportation. Experts warned that the environment of containers in transit could be similar to that of the cold-chain system.

The agencies require real-name registration and health monitoring of ground personnel who are in direct contact with imported goods, and ways to ensure that imported goods and other goods are not mixed together during transportation and loading, to minimize the risk of crossover infection.

Officials from the Civil Aviation Administration of China said the move is aimed at preventing outbreaks over the coming winter and spring.

Some ports and freight transportation agencies reached by the Global Times on Thursday said that Chinese ports in cities such as Tianjin and Suzhou had adopted detailed measures for imported shipments to reduce risks brought by the overseas pandemic.

A foreign trader surnamed Zhou in Suzhou, East China's Jiangsu Province told the Global Times that all containers containing imported goods must be disinfected before being allowed into the city. The goods undergo disinfection again after being allocated to different districts, according to Zhou.

Some kindergartens in Beijing started to ask if any family members of the children had been exposed to imported goods or containers, the Global Times learned.

Lifting imported cargo containers, especially - but not only - those containing cold-chain products, is slow and expensive because of the new precautions, a Tianjin-based international freight agent surnamed Xing told the Global Times.

"Containers from severely stricken areas such as the US and Europe will be disinfected first, and the procedure is much longer than before," Xing said.

Fan, the fleet manager of Tianjin Jintaiheng Logistics Co, told the Global Times on Wednesday that his company shifted to non-frozen imports a month ago temporarily, avoiding frozen imports like crabs and meat from Europe, Japan and South Korea.

"We still have several cold-chain containers lying idle, waiting to be inspected," Fan said, and some clients may even abandon their imported frozen food instead of paying extra costs, posing a risk for logistics companies.

Zhang takes a more optimistic view, believing the impact on frozen imports and cold-chain companies will eventually end. "Frozen food imports cannot be banned entirely because China needs a large amount of imports to fill gaps in domestic supply. All we can do is minimize our losses and try to survive the blizzard," he noted.

On Thursday, the Global Times found imported frozen products including beef and fish, which tested positive for novel coronavirus in Tianjin ports, were circulating in the markets of multiple cities.

Contaminated imported frozen beef handled via Tianjin was discovered in the markets of Ningshan county, Shaanxi Province. Some batches of beef had already been sold to local restaurants, and local health authorities were tracking people who had contact with the contaminated beef in any form and asking them to take nucleic acid tests.

Wu Zunyou, the chief epidemiologist of the Chinese Center for Disease Control and Prevention, said at a Wednesday media briefing that the environments of containers in transit could be similar to the cold-chain process, causing sporadic or even local outbreaks. As winter approaches, whether by air, land or sea, the ambient temperature is the same as that of the cold chain system.

Chinese testing of packaging has stirred some controversy, with exporters of frozen food items questioning the science behind it and whether it amounts to an unfair trade barrier, said a report from voanews.com on Wednesday.

Tian Yun, a vice director of the Beijing Economic Operation Association, told the Global Times that "if China was exporting the virus, those countries would complain louder, and even have more severe criticism than ours."

"Now, the measure China takes is a normal and necessary reaction of the market," he added.