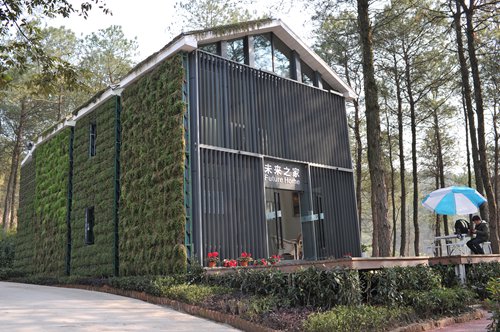 As domestic companies continue to upgrade their manufacturing capabilities and constantly explore the overseas market, they are also finding abundant opportunities in niche areas. Turning high labor costs in some developed countries into its own advantage, Shenzhen Yahgee Modular House Co has found a potentially massive overseas market for its prefabricated homes, especially in New Zealand. The company's success offers a great case study for how Chinese companies could find new markets amid rising challenges. For years, Chinese-made household goods, from electronics to furniture, have been filling up homes in many countries and regions across the world, so why not also build homes for these foreign families? That is what one Chinese company asked, and it did just that.

With the help of more than half a dozen of its subsidiaries and factories across China, Shenzhen Yahgee Modular House Co has been building prefabricated homes that are transported across the globe and house families in countries and regions spanning New Zealand, Singapore and Norway. But the company said that this is just the beginning of its overseas journey, as the demand for its easy-to-assemble modular homes in countries and regions that face high labor costs is continuing to rapidly grow. More than just selling products, Yahgee said it also helps these countries and regions address serious issues such as shortages of housing and labor.While the company still has to navigate through complicated building codes and other challenges in foreign countries and regions, the initial success of Yahgee offers a great lesson on how Chinese companies that are eager to expand overseas could find a niche market, experts noted.Kiwi demandWhile the company has been exporting prefabricated homes and modules to hotels and other projects in many countries and regions, it recently started gaining attention in New Zealand.Working with New Zealand partner Ecotech Homes, the company has sent about 60 prefabricated homes to the country so far, and is looking to build thousands of new ones as part of the New Zealand government's massive housing project, Kiwi Build, according to the two companies.By mid-2019, Yahgee could have produced as many as 8,000 modular homes for New Zealand, meeting huge demand in the country's housing market, according to Tony Frost, founder of Ecotech Homes."The [New Zealand] market is very strong and with Kiwi Build announcing its need for significant volumes of affordable homes and tourism experiencing strong growth, Ecotech and Yahgee are well positioned to help," Frost told the Global Times via email.Under the Kiwi Build program, the New Zealand government plans to build a total of 100,000 affordable modern homes across the country over the next 10 years.But New Zealand is experiencing a shortage of construction workers and traditional construction takes much longer, causing serious hurdles for the implementation of the government's plan, Guo Qing, general manager of Yahgee, told the Global Times, adding that's where his company's modular houses come in.Advantages "The many advantages that modular houses bring could no doubt help address this issue," Guo said in an emailed response, noting that the construction of such homes costs significantly less money, time and labor compared to traditional houses. "In particular, the cost advantage is very significant. In some projects, it could save 30 percent."According to a report released by New Zealand news website stuff.co on June 28, a three-bedroom modular house only takes 10 days to assemble after it arrives in New Zealand.Impressed by the result so far, New Zealand will send a delegation of government officials and developers to China in August to visit Yahgee's factories in South China's Guangdong Province, which could lead to more Chinese-built modular houses in New Zealand, Guo said.Guo also noted that the company's products go beyond New Zealand and to many other countries and regions, including a rental house project in Norway, apartments in Sweden and a student dormitory project in Singapore - all developed countries with very high labor costs.Yan Yuejin, a research director at Shanghai-based E-house China R&D Institute, said that modular houses are a step further in the industrialization of residential real estate and are quickly gaining popularity."These kinds of houses are very popular in foreign markets, largely because of the high efficiency in supplying [components]," Yan said.Guo added that the company is also planning to further expand its business in the US and Japan in the next phase.Challenges persist However, there are challenges that come along with such endeavor, as each country and region has its own set of rules and codes for housing projects.For example, there are strict building codes and standards in New Zealand for imported residences and construction materials. After being imported, they will then be checked by the relevant local authority, the process of which usually encounters some issues, according to a Chinese national who has been working in New Zealand's construction sector for more than five years. The person, who preferred to be named as Liu, said that when the project's plumber and electrician start follow-up work, it is not exactly a smooth process."As required by the local building code, imported wood has to be damp-proof, fire-proof and insect-proof. And for a steel structure, the calculation of its stretch and bearing ability should be converted from the Chinese code to the New Zealand one, which means it takes plenty of work," Liu explained. "As such, the mode in general has no price advantage.""Furthermore, the local bank won't accept the loan application for this kind of imported building," he noted.Frost of Ecotech Homes also said that the one disadvantage of Chinese-made modular homes is that "most factories do not understand the stringent requirements of the New Zealand code and high demand for quality."Another challenge is the negative stigma attached to Chinese-made products that they are of bad quality, according to Guo."When we engage with overseas clients, we find that some of them, and even some local media, have some concerns over the quality of 'Made in China' goods," he said. "It is not easy for Chinese companies to go abroad, especially those in the construction sector."But despite these challenges, there are markets waiting to be discovered by Chinese companies, as long as they focus on quality and read into foreign market demand, he said."'Made in China' could still mean high-quality and high standards."