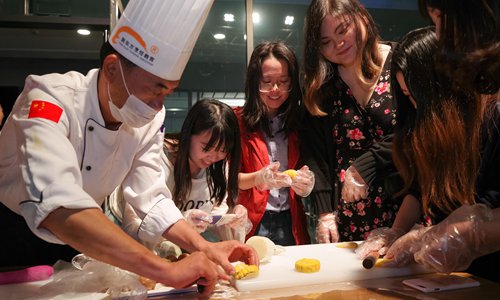 More than 40 students from Hong Kong, Macao, and Taiwan studying in universities in Beijing celebrate the Mid-Autumn Festival with their mainland peers on September 12, 2019. (Photo: VCG)

The Chinese mainland government announced on Monday a series of measures giving equal treatment to businesses and individuals from the island of Taiwan, aimed at improving cross-Straits economic and people-to-people exchanges, as such interactions have been severely obstructed by the Democratic Progressive Party (DPP) in recent years, observers said.

Twenty-two government departments wrote the measures, including the Taiwan Affairs Office of the State Council, Ministry of Education, Ministry of Science and Technology and Ministry of Commerce.

The measures are a continuation of the "31 Measures" issued in 2018 meant to stimulate economic and people-to-people exchanges across the Straits, the office said, noting is another move to treat Taiwan compatriots equally.

The measures will allow Taiwan compatriots to seek consular protection and assistance at embassies and consulates of the Chinese mainland. Taiwan residents can also buy residential property on the mainland if they possess Taiwan residence permits.

Shaw Chong-hai, former head of the school of social sciences at Chinese Culture University in Taiwan, praised the house purchasing terms, saying people from Taiwan can enjoy the same career evaluations as people from the Chinese mainland.

He believes those two measures will solve the fundamental concerns of some people in Taiwan considering living and working in the mainland.

The pro-independence stance of Tsai Ing-wen, current regional leader of Taiwan, has soured cross-Straits relations, which propelled the Chinese mainland authority to suspend individual trips to the island, said Yang Lixian, a research fellow at the Beijing-based Research Center of cross-Straits Relations.

She said the 26 measures open a new window for cross-Strait economic and people-to-people exchanges as Tsai and her DPP tried to obstruct such communications.

The measures, however, were attacked by Taiwan's "mainland affairs council," which claimed the measures will benefit the mainland. Ma Xiaoguang, spokesperson for the Taiwan Affairs Office of the State Coucil, said on Monday such remarks reflected the "council's" dark side of going against Taiwan compatriots' interests, as such measures are widely welcomed in the island.

Yang slammed accusations that the measures, which were published two months before the island's regional election, were intended to sway the election. "The mainland has its own systematic procedures of reunifying the island of Taiwan, and will be achieved in the foreseeable future regardless of the election result," said Yang, noting that any remark to defame such measures is to antagonize people on either side of the Straits.

The measures ease procedures for children of Taiwan businesspeople who want to take the college entrance examinations. Universities in the Chinese mainland will expand enrollment for Taiwan students.

Athletes from Taiwan are also welcome to participate in national games and exchange experiences with professionals from the mainland.

The office vows to assist Taiwan athletes' preparation for the 2022 Winter Olympic Games in Beijing and the 2022 Asian Games in Hangzhou.

Once implemented, the measures can assist Taiwan people visit and form a better understanding of the Chinese mainland, which also lays the foundation for future reunification, Shaw said.

The measures also provide equal treatment to Taiwan companies. They will allow Taiwan-invested companies to participate in major technical and equipment innovations and industrial and engineering construction. Taiwan-funded enterprises can also enjoy the same trade security measures and remedies as mainland enterprises.

Qualified Taiwan financial institutes and companies are also entitled to apply for financial guarantees from local governments in the Chinese mainland.

Many people on the island of Taiwan are concerned if the Cross-Straits Economic Cooperation Framework Agreement (ECFA), a deal that benefited Taiwan for about 10 years, would be renewed, Yang noted.

"Unfortunately, due to reasons known to all, negotiations on the signing of the follow-up service between the two sides have been interrupted. The agreement cannot benefit more Taiwan compatriots," Ma said at a routine press conference on Wednesday.

Yang said the recent measures can also serve as complimentary ones to boost cross-Strait economic exchanges, if the ECFA cannot be renewed due to Taiwan pro-independence forces' muddling.

In February 2018, the Taiwan Affairs Office announced the "31 Measures" related to entities in Taiwan. The measures - drafted by 30 government departments - are intended to provide better opportunities for businesses and individuals from Taiwan in the Chinese mainland.