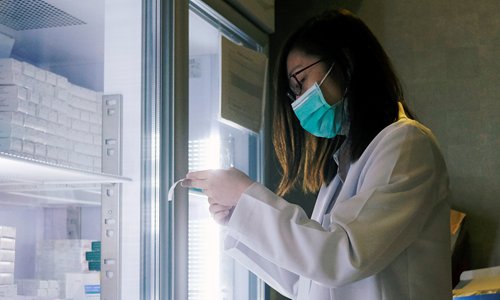 A nurse looks for vaccines at a children's clinic in Hong Kong on July 24. (Photo: VCG)

Hong Kong clinics are witnessing an influx of Chinese mainlanders taking their children for immunization these days after a faulty vaccine scandal that enraged the nation last week.

Thousands of children have been injected with the problematic vaccines that prove to be of no use in fending off diseases.

Concerned parents are researching the possibility of taking their children to Hong Kong where vaccines are imported. Strategies for getting foreign-made vaccinations are now widely spread on China's Internet and social media.

Meanwhile, the South China Morning Post reported that some people in Hong Kong said that the local government needs an urgent policy to deal with the anticipated rising influx of mainland visitors seeking vaccinations.

China's regulations stipulate that schools need to check on whether children have received required vaccinations before admission. Those who failed to get these injections will be reported to the local disease control department.

Despite the rising demand from mainland parents, experts stress to media that parents should be cautious in choosing imported vaccines which are not absolutely guaranteed to be safe.

There are 40 vaccine manufacturers in China that are capable of producing 60 types of vaccines. Domestically-made vaccines comprise more than 95 percent of vaccinations in the market, according to the Beijing News.

It's reported that 252,600 doses of substandard vaccines by Changsheng were distributed to eight cities in Shandong Province and injected into 215,184 children. In Hebei Province, the vaccines have affected 143,941 children. Over 400,000 ineffective DPT vaccines from the Wuhan Institute were sold to Chongqing and Hebei.