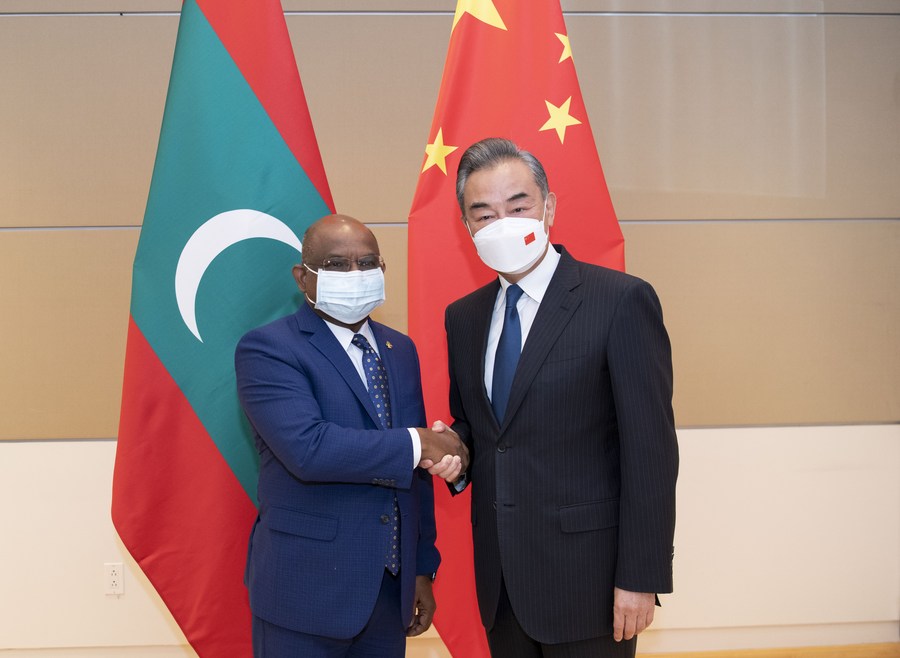 Wang congratulated Shahid on his successful performance of his duties as the president of the UN General Assembly, as he made positive contributions to the development of the UN cause and tackling global challenges, which helped the Maldives improve its international status and influence.

Noting that this year marks the 50th anniversary of the establishment of diplomatic ties between China and the Maldives, Wang said that over the past half century, the two sides have upheld the spirit of good-neighborliness, treated each other as equals, developed through cooperation, reached out to each other, and tided over difficulties together.

He also said that China highly appreciates the Maldives for understanding and supporting China's just propositions on issues concerning China's core interests and major concerns. China also supports the Maldives in safeguarding sovereignty, independence and national dignity, and will continue to uphold justice for the Maldives in the international arena, Wang added.

For his part, Shahid expressed his gratitude to China for giving his country precious support in infrastructure, education, energy and other fields for a long time. The China-Maldives Friendship Bridge co-built by the two sides has brought a sea change to the Maldives, greatly accelerating the country's economic development and bringing benefits to its people, he said.

Wang said that China and the Maldives have enjoyed the tradition of mutual understanding and support, and China appreciates the Maldives' adherence to the one-China principle, adding that on issues concerning sovereignty, no double standard can be tolerated.

He mentioned now that some countries flaunt respect for national sovereignty, they should match their words with their deeds, stressing that on the Taiwan question, China's sovereignty and territorial integrity must be equally respected, "Taiwan independence" separatist activities must be clearly opposed and any form of official exchanges with Taiwan must be cut off.

The two sides also vowed to continue to promote high-quality Belt and Road cooperation and accelerate the ratification of a free trade agreement, so as to inject more stable and positive expectations into bilateral cooperation.