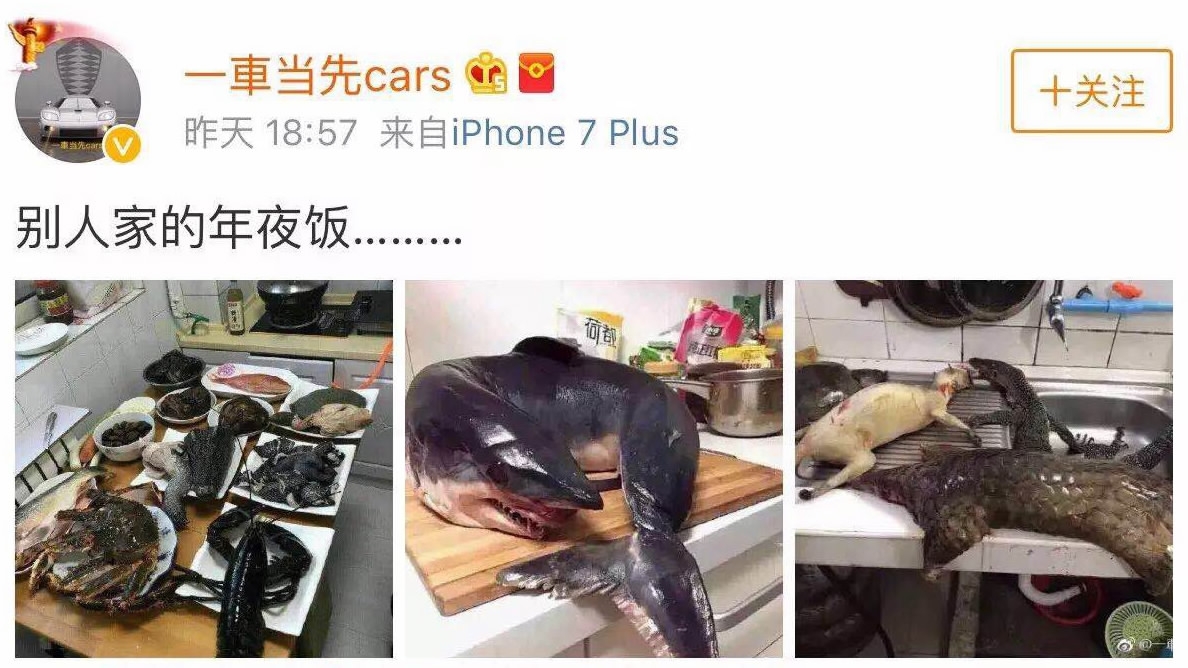 Chinese New Year’s Eve is all about festive family feats, with social media in the country usually inundated with snaps of dishes people emptied to mark the Lunar New Year. However, one online prankster found himself in a pickle after posting pictures of exotic and endangered animals he claimed he had for dinner, causing a stir on China’s Twitter-like Weibo and prompting law enforcers to investigate the allegations.

The man, identified as Rao, was detained by police following a public uproar over savage pictures of rare butchered wildlife and animal body parts, some protected under Chinese law, which allegedly made up his dinner on New Year’s Eve.

The pictures, posted on February 15, feature a bear paw in a pot, crocodile meat in a plastic tub, a shark on a chopping board, a pangolin and a turtle near a sink, and an array of seafood including lobsters, crabs and sea cucumbers – most of which are traditionally considered as delicacies among Chinese people.

“Someone’s reunion dinner at home,” he captioned his post.

A good lot of the exotic animals pictured in the post are protected by law, and their trade and consumption are prohibited. However, some of these animals are seen as gourmet food in the country, and their parts still find their way to lavish banquets despite bans, owing to black markets and illegal traffickers.

The Pangolin for example is under second-class state protection in China and has received the highest level of protection under the Convention on International Trade in Endangered Species of Wild Fauna and Flora (CITES). It is, however, the world's most heavily trafficked mammal.

Bears, crocodiles and around two dozen species of turtles also enjoy a protected status in China.

The now-deleted post went viral on Weibo, being shared 15,000 times in one day and triggering widespread anger. Many commented that the next dinner the man will be having would be in jail – and they were right, sort of.

China’s State Forestry Administration soon appealed via its account on Weibo for more information on the user and the accuracy of the post.

By Friday afternoon, the man had been tracked down to central China's Hunan Province and taken into custody.

Rao said the photographs were not his, and noted he either downloaded them from the Internet or copied them from posts by his friends on social media, with some having been doctored. He denied having consumed the beasts in the pictures, and said he posted them to gain more following.

"I just tried to create a popular post and win likes under the post," he confessed in an apology letter.

However, his regret did little to win clemency from the authorities, who decided to keep him for five days in detention for spreading fake information.

In a similar case over the weekend, another man, living in the southwestern province of Guizhou, found himself in the net of police after trying to sell a leopard cat online and posting a video maltreating the feline. He pleaded guilty to causing a protected animal unnecessary suffering, and was fined 3,000 yuan (around 470 US dollars) after investigators found no evidence that the cat had been sold or killed.