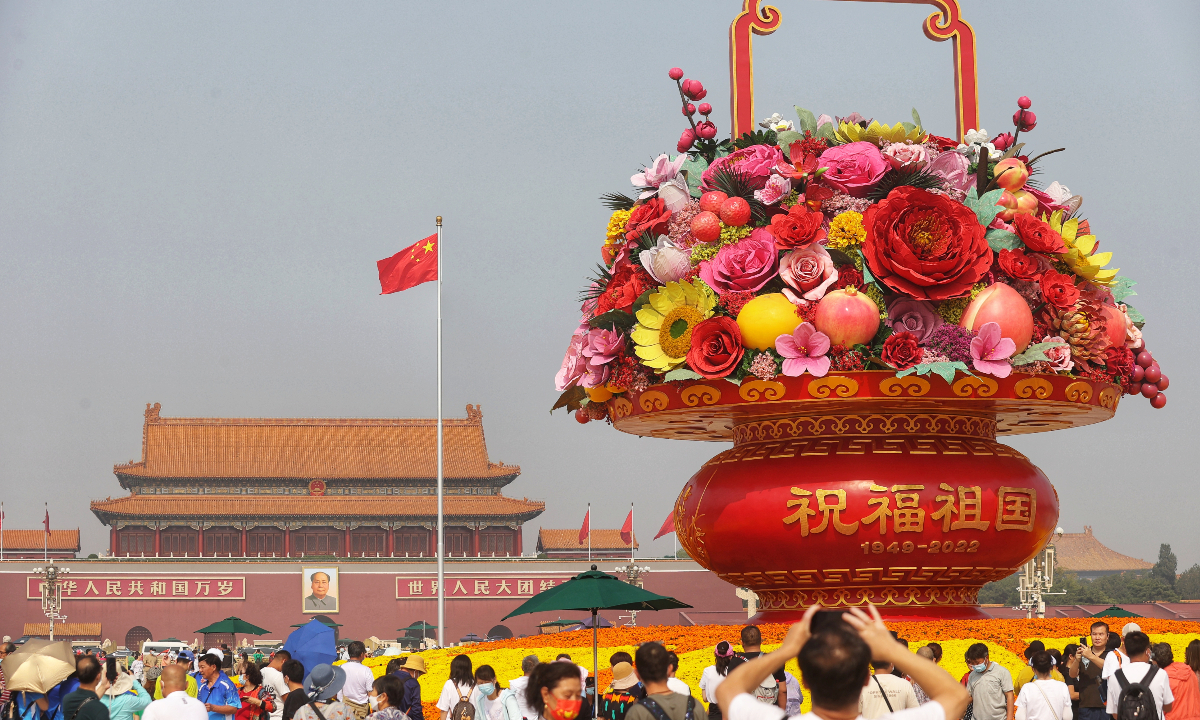 Chinese are celebrating the 73rd birthday of the People's Republic of China on Saturday, which is also the first day of the week-long National Day holidays, with more than 200 thousand people gathering at Tian'anmen Square in Beijing for the national flag-raising ceremony beaming with excitement and pride.

The nation also has received multiple "gifts" ahead of her birthday, including the C919, China's first homegrown large jetliner, which obtained the type certificate on Friday, a milestone on its journey to market operation. In addition, China's space station lab module Wentian successfully completed in-orbit transposition at 12:44 pm Friday, and this is also the first time that there are Chinese Taikonauts sending birthday blessings to the motherland from space.

China women's national basketball team also reached the final of the FIBA Women's Basketball World Cup for the first time in nearly 30 years, and even though the team lost to the US, the most powerful team in the world, they still won respect across the country as their performance has encouraged numerous people.

Analysts said the stability, safety and certainty of China has provided the people an ideal environment to enjoy the holidays, and it also presents an ideal atmosphere with great patriotism for the upcoming significant 20th National Congress of the Communist Party of China. 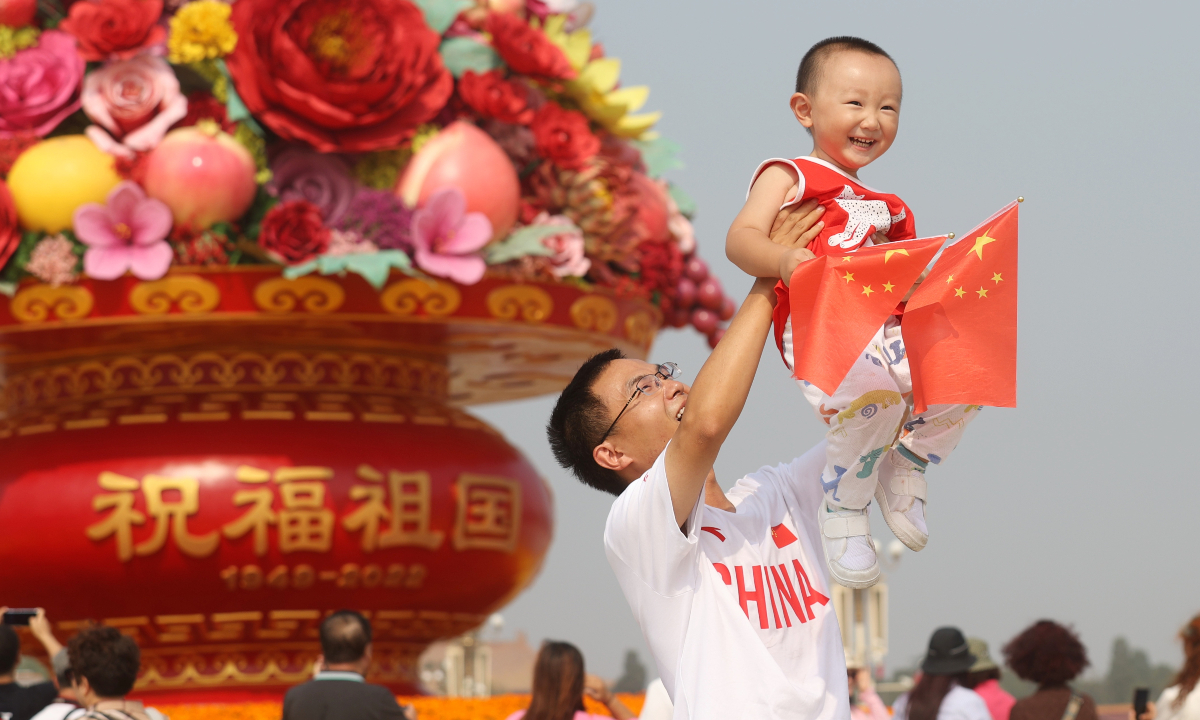 In order to attend the national flag-raising ceremony at Tian'anmen Square, which is a solemn event held every day at the same time with the sunrise that attracts tourists from all over the country and even around the globe with a special romance with Chinese characteristics, many tourists and Beijing residents have come to the square at night a day ahead of the ceremony, as they wanted to get the best position to witness the whole process.

Zhang Li, a student from Beijing-based Tsinghua University, came to the square at about 10:00 pm Friday night, and spent the whole night with his friends there because he knew that there would be a huge crowd lining up for security checks to enter the square from midnight.

"We found some people were there already when we arrived. They came at 9:30 pm with national flags in their hands," he told the Global Times.

Liu Ling, a Beijing resident, who also went for the early morning ceremony, was not that lucky. She said that she didn't expect there would be so many people as she arrived at the square at about 4:00 am. Still, she had to stand far away from the flag tower even though she entered the square. "But I'm still happy and I believe everyone who come here is proud of our motherland."

According to Beijing Daily, there were more than 218,000 people attending the ceremony with strict epidemic prevention and control measures being observed.

The festive and patriotic atmosphere can be found everywhere across the country. Five-star red flags are dazzling Chinese streets and Chinese social media was filled with blessings wishing the motherland to be more prosperous and stronger. A video which went viral online showed young Chinese frontier soldiers from China's east, south, west and north border areas passed on guns virtually to celebrate the 73rd anniversary of the founding of the PRC.

China's national flags and the Hong Kong Special Administrative Region's (HKSAR) flags were hung across the streets in Hong Kong. The PLA garrison in Hong Kong held a flag-raising ceremony on Saturday morning to mark the National Day.

While people across the country are celebrating the National Day holidays in many different ways, the week-long holidays, known as the country's "Golden Week", are expected to see flourishing spending in sectors such as tourism, catering and movies despite travel is still restrained by the lingering impact of sporadic COVID-19 outbreaks.

Chinese railways are expected to see 9.7 million passenger trips and run 8,733 passenger trains on Saturday, the first day of the Global Week. The whole 11-day-long National Day holiday travel rush, which lasts from September 28 to October 8, will see some 6.23 million passenger trips to be made on average each day, according to data from China State Railway Group Co.

For example, tourism bookings for Sanya, South China's Hainan Province, which just emerged from a recent COVID-19 outbreak, have doubled in the last week of September compared with the previous week, according to domestic online travel agency Trip.com on Thursday.

Red tourism routes in particular have become widely popular during the weeklong holiday, with search for red tourism up 120 percent on a weekly basis, says a report from Chinese tourism platform LY.COM released at the end of September. The Red Street in Chinese revolutionary base Yan'an, Northwest China's Shaanxi Province, and the Nanhu Lake in Jiaxing, East China's Zhejiang Province, are among the popular destinations.

According to data from tech and retail giant Meituan, online catering bookings during the 2022 National Day holidays increased by 87.6 percent compared with 2021 and bookings for fine restaurants have surged 49 percent from last year. Orders for high-end restaurants from Beijing has surged three times, which is followed by Hangzhou, East China's Zhejiang Province, and Shanghai.

According to the National Bureau of Statistics, in August the revenue from catering rose by 8.4 percent year-on-year as consumption continues the recovery trend.

In addition, the domestic film market is expected to see a boom during the National Day holiday boosted by the collective screening of patriotic films that focus on stories about Chinese people's love for the motherland.

Data from Chinese ticketing platform Maoyan shows that the box office for these movies had surpassed 100 million yuan ($14.05 million) by Saturday morning, with the film Home Coming, based on a true story about bringing trapped Chinese nationals back to their homeland, topping the list.

Greetings from around world

Leaders from the United Nations and other countries have sent their best wishes to China on China's National Day.

UN Secretary General Antonio Guterres sent his congratulations to the Chinese people on National Day, with best wishes to the country and the people of China.

Iranian President Ebrahim Raisi said in his congratulatory message to China that "I believe, with the guidance of China’s leadership and the efforts of Chinese people, China will achieve its development goals soon, and via cooperation with other nations, China will definitely have new achievements."

China, as the second largest economy, is a source of stability in a perpetually changing world, the prime minister said in his message on the 73rd anniversary of the founding of the People's Republic of China on Twitter.

Sharif said China offers a promise of hope to the developing world beset by multiple crises relating to climate, finance, food and energy, adding that the Chinese template of inter-state relations prioritizes cooperation over confrontation, a governing principle in the formation of a community of common destiny.

US State Secretary Antony Blinken said in a press statement released on Friday that "On the occasion of the 73rd People's Republic of China National Day, I offer my congratulations to the people of China on behalf of the United States of America."

"As the United States works with the international community to tackle the great obstacles the world faces today, we welcome the cooperation of the People's Republic of China in addressing global challenges in health, climate change, counternarcotics, and other areas where our interests intersect," he said.