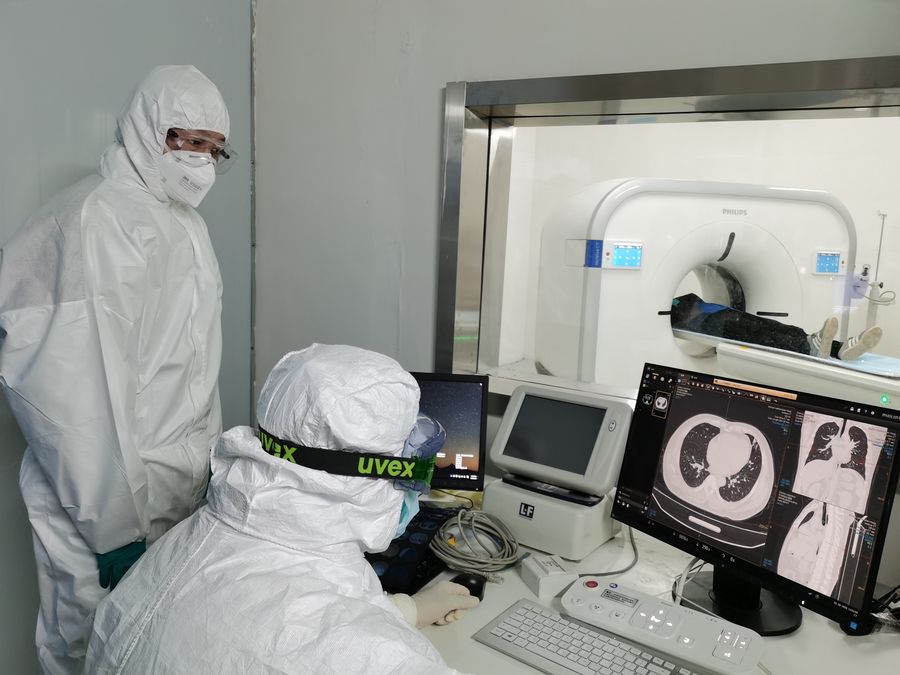 LOS ANGELES,  April 5 (Xinhua) -- One of China's leading physicians who helped lead the battle against COVID-19 in Wuhan, China's COVID-19 epicenter, advised American physicians that controlling the virus requires a coordinated effort from the top on down, a system many American officials and physicians are also clamoring for.

"American physicians should have national guidelines for the treatment of COVID-19," urged Dr. Cao Bin, a respiratory expert and vice president of China-Japan Friendship Hospital (CJFH) in Beijing on a conference call with American physicians early this week.

Cao was among the first wave of stalwart medical professionals who raced to Wuhan to support the overwhelmed healthcare system on the verge of collapse. He and his team used their extensive experience to set up and implement the emergency system that saved countless lives that had been hanging by a thread.

"So far we have seen that many institutes in the U.S. have their own guidelines for the coronavirus," he noted.

At present, the White House has not issued strict public health protocols that are required to be followed by every state and U.S. hospital to stop the virus nationwide. Hospitals across the country have to invent their own protocols or decide which of the CDC recommendations they feel like following.

Cao believed that leadership must come from the top so that every medical facility in every state is following the same guidelines and using the same effective techniques as those that worked successfully in China and South Korea.

Cao's advice mirrored the call for federal government intervention that has risen to a clamor in the country too. New York Governor Andrew Cuomo, California Governor Gavin Newsom, and a host of American medical professionals have all urgently called for White House and America's top health officials to step up and establish comprehensive and proven guidelines for all the states to follow to slow the raging outbreak in the nation - which is now the worst in the world.

"This is truly frightening," said Governor Cuomo, "I've handled a lot of emergencies as governor and in the federal government ... but nothing comes close to this in terms of the need for intelligent, rigorous, muscled government to respond quickly and smartly."

He added, "States don't do public health emergencies. If it's beyond the capacity of the local state, then the federal government has to step in. No state is equipped to handle this on their own."

China's successful control of the COVID-19 created a roadmap for others to follow, based largely on the efforts of Chinese doctors who managed the most challenging public health disaster in decades.

Dr. Zhan Qingyuan, the Chief of Medical ICU at the CJFH in Beijing and Chair of the Critical Care Committee of the Chinese Association of Chest Physicians, spearheaded the medical response in the Wuhan hospital designated to treat the most severe COVID-19 cases.

He stressed the vital need to learn how to establish temporary medical facilities virtually overnight and discussed how to be better prepared and how, in the future, to have a well thought out Standard Operating Procedure in place well in advance that can kick into effect in a crisis like this.

He told over 1,500 members of American College of Chest Physicians joining the online conference that the need for doctors and hospitals everywhere to do what they can to immediately organize adequate medical facilities and supplies and ensure an adequate supply of vitally important ventilators, life support equipment, monitors, testing kits, mobile x-rays, among other equipment.

Zhan also advised that the doctor-nurse respiratory critical care team should be led by a designated team leader and include specialists in nosocomial infection control, CPR and urgent intubation, PICC insertion, percutaneous tracheostomy, bronchoscopy exams, and ECMO establishment, and respiratory therapists, who should work in six-hour shifts to avoid exhaustion and over-exposing themselves to the virus.

Based on China's experience, Zhan said that the U.S. pattern for COVID-19 is likely to match China's which was 80 percent mild cases, 15 percent severe patients and 5 percent critical ones -which would need prioritized treatment.