CHINA Chinese medical team hailed for their services in Ethiopia

Chinese medical team hailed for their services in Ethiopia 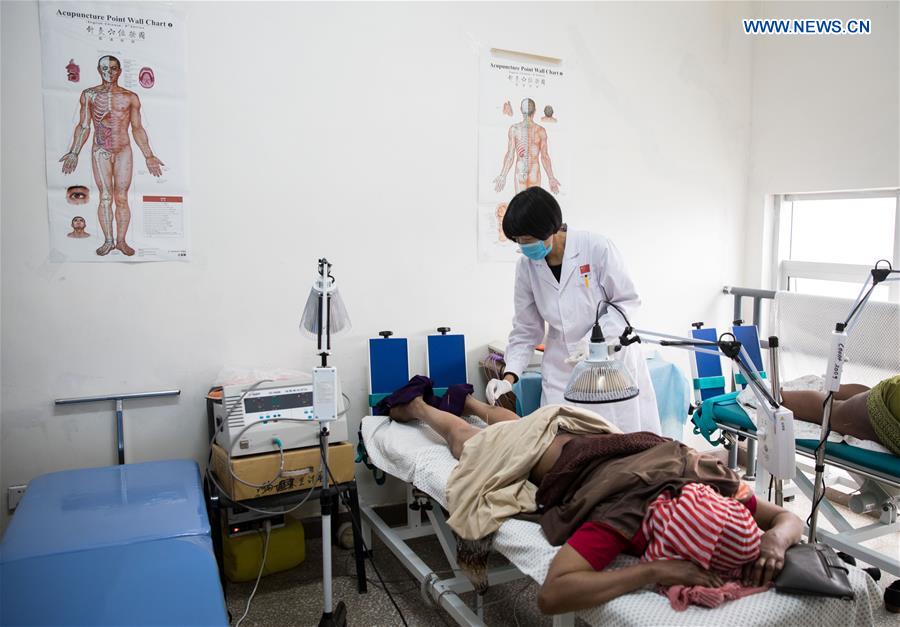 Addis Ababa (Xinhua) -- Workayehu Begi, 50, has been suffering from a severe back injury since she fell down the stairs about a month ago, despite having received several rounds of medical treatment from various health facilities in Addis Ababa, capital city of Ethiopia.

Begi said her pain however has largely reduced over the last two weeks ever since she was referred to the Chinese-backed Tirunesh-Beijing Hospital for an acupuncture treatment, an ancient Chinese method of treatment in which fine needles are inserted in the skin at specific points to treat various physical and mental conditions.

"I was injured in a fall in my house, and doctors referred me to 15 days' acupuncture treatment and I see visible difference now," said Begi.

Emphasizing that acupuncture is not just a medical treatment, but a guide to a healthy lifestyle, she said Chinese doctors working at Tirunesh-Beijing Hospital is also giving her advice on how to stay healthy to prevent future ailments.

"They advise me to avoid frequent up and down movement of my body, to correctly seat on chairs, avoid standing still for long time or sitting for long time, eat vegetables and do frequent physical exercise." she said.

"This is a treatment many have been cured with, I've also witnessed my bodily improvements and now I'm giving lessons to my society on acupuncture benefits," Begi said.

While patients like Begi is grateful for receiving Chinese medical treatment for their pains, for Anemaw Workineh, 30, a nurse at Tirunesh- Beijing Hospital, the partnership with Chinese doctors has enlightened him on the Chinese ethics of fast, efficient, and hard work.

"Chinese doctors are fast reactors when you call them for help and they are diligent in their work," Workineh told Xinhua.

The 20th batch of the Chinese medical team, which constitutes 16 medical professionals, is based at Tirunesh-Beijing Hospital, also known as the Ethio-China Friendship Hospital, located in Akaki at the outskirt of Ethiopia's capital Addis Ababa.

The team, deployed at Tirunesh-Beijing Hospital, is the continuation of China's medical mission to Ethiopia that has been serving the people of the east African country since 1974.

Consisting of 15 doctors and one translator, specializing in thirteen different medical majors including cardiology, eye treatment, acupuncture and pathology treatment, the Chinese medical team has been treating Ethiopians regardless of their background, and in the process, imparting their medical knowledge to Ethiopian colleagues.

Speaking to Xinhua, Zhao Cheng, Team leader and Cardiologist of the 20th Chinese Medical Team, said his team has been giving their medical services to Ethiopian patients since August 2017, despite the noticeable differences in prevalence of medical ailments between what they saw in China and Ethiopia.

"Chinese patients have many kinds of cardio diseases and suffer from tumors besides normal disease, for African people there is a prevalence of infectious diseases and traffic accident injuries." he said.

Zhao also said his medical team has also been working hard to treat Ethiopians and Chinese expatriates who have not been able to come for various reasons to Tirunesh Beijing Hospital.

He is optimistic the Chinese medical mission will continue to serve thousands of Ethiopians in need of medical care while helping train a new group of Ethiopian medical professionals.

According to Zhao, their dedication and service manifests the growing people to people relations among the two brotherly countries, more than four decades after the first Chinese medical team arrived in Ethiopia.

Mei Gengnian died in 1975 in a car accident while he was serving local communities in Jimma town of Oromia regional state, where he was still remembered and receiving homage from local community members.