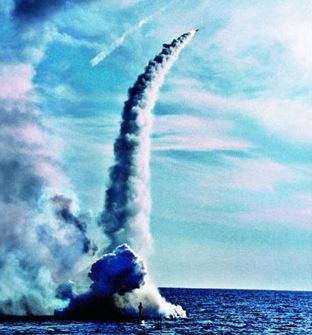 On Monday, the People's Liberation Army Navy posts a file photo of the firing of a submarine-launched ballistic missile on Sina Weibo, China's Twitter-like social media, asking, "Do you believe [there are] UFOs, too?" (Photo: screenshot of Sina Weibo)

The UFO sightings across multiple provinces in China on Sunday were likely the result of a Chinese submarine-launched ballistic missile (SLBM) test, military observers said after the Chinese military gave hints late Monday evening on the nature of the said UFO.The likely SLBM test on Sunday coincided with Chinese Defense Minister Wei Fenghe's Sunday keynote speech at the Shangri-La Dialogue in Singapore.DF Express, the Sina Weibo account of the People's Liberation Army (PLA) Rocket Force, in a post Monday evening said "Do you believe there are UFOs in this world?" with a file photo of a ballistic missile in launch position.Soon after, the PLA Navy also posted a file photo of a SLBM with the caption "Do you believe [there are] UFOs, too?"On Sunday, China conducted a military exercise in the Bohai Sea and Bohai Straits, which coincided with reports on social media from residents across multiple provinces of China saying they saw a UFO with a glowing fiery tail streak across the sky. At the time, experts speculated that it was a SLBM test launch.The Weibo posts by the two military branches soon went viral and accumulated more than 100,000 likes within 12 hours. Chinese netizens and military enthusiasts were more than a little amused by the obvious hints the Chinese military has given about the likely SLBM test launch.Netizens widely speculated that the SLBM tested this time could be the JL-3.The JL-3 is China's latest SLBM under development that is expected to be able to reach targets farther away with higher accuracy and capable of carrying more warheads than China's current SLBMs, Xu Guangyu, a senior consultant at the China Arms Control and Disarmament Association, told the Global Times on Tuesday.According to a Monday report by Russia's state TV channel RT, the JL-3 has a range of up to 14,000 kilometers and is equipped with 10 independent guided nuclear warheads."China needed to conduct test launches for the JL-3 to finish its development and join military service," Xu said. Xu noted that there have not been enough test launches in the past.Li Jie, a Beijing-based naval expert, offered another possibility. Li told the Global Times that an intermediate-range missile could have been tested on Sunday, not the intercontinental JL-3.Despite the hints by the military and analyses from experts, there is still no official confirmation about the suspected test launch.The likely test launch came after the US released 2019 Department of Defense Indo-Pacific Strategy Report on Saturday, and US warships frequently making what are widely seen as confrontational and belligerent passages through the Taiwan Straits and the South China Sea.It is important to showcase China's deterrence capability to counter US provocations, Xu said."Defense Minister Wei spoke well at the Shangri-La Dialogue. He expressed our attitude and determination, but we also need to take concerted action," Xu said.