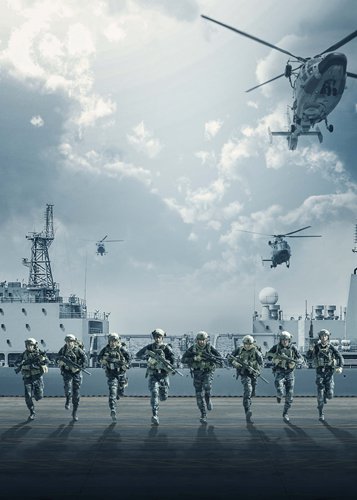 "When I asked [the Chinese navy] to what extent they can lend me help, the answer I received was 'anything you want we will do our best to cooperate,'" Dante Lam, the Hong Kong movie director whose military action movie Operation Red Sea is about to hit the big screen on February 16, told the Global Times. A fan of military movies, Lam said he long wanted to make a movie like those he watched from overseas. "I had seen a lot military movies from abroad, supported by their military, that promote the power of their current troops… but such a wish remained a fantasy," Lam said. Lam, known for Hong Kong gangster and action movies, became a renowned figure after the 2016 hit Operation Mekong.  Based on the 2011 Mekong river massacre, Operation Mekong achieved a total box office of 1.18 billion yuan ($187 million), becoming the sixth highest-earning movie of the year, surpassing Hollywood blockbusters Kung Fu Panda 3 (1 billion yuan), The Jungle Book (979 million yuan) and Star Wars: The Force Awakens (825 million yuan).  Aside from its commercial success, the Hong Kong director was applauded for making a movie that not only carried the politically positive message about the Chinese government and police, but also entertained Chinese audiences. Operation Red Sea, with investment from the Chinese navy, tells the story of Chinese marines evacuating Chinese people when a military coup breaks out in an African country. It is based on an evacuation during the 2015 Yemeni Civil War. Bolstering patriotismOperation Red Sea is not the first movie to receive direct support from the Chinese military, which provided real arms and equipment. Wolf Warrior 2 "received full support from the military in heavy weaponry…[including] Type 59D tank from a military region in Nanjing… 08 infantry fighting vehicle, Type 11 wheeled attack vehicles and Type 05 self-propelled garnet gun," according to a report on mil.news.sina.com.cn.Co-produced by the China Air Force, the 2017 war movie Sky Hunter showed still-in service fighters and transport planes including the J-20, Y-20, J-10C, and J-11B, China.org.cn reported. And in the trailers for Operation Red Sea, Type 054A frigates and a Type 071 amphibious transport dock appear. The Chinese military's willingness to showcase its latest armaments, according to Li Jie, a Beijing-based naval expert, is due to the fact that "the comprehensive national strength of China has risen by a large margin and in some aspects even surpasses other leading powers," Li said."China's naval force long lagged behind. But entering the second decade of the 21st century, China's overall maritime force has surpassed countries like Japan, the UK and France, and is even better than the US in some areas."For this reason, he said, the Chinese government "pays more attention to people's recognition of their homeland and how to generate pride in the nation." Expanding global roleSuch movies are appearing as the Chinese military begins to play an important role in overseas rescues and UN peacekeeping operations. Lam said that this time he wants to make a different military action movie. Familiar with action blockbusters, Lam said that one of the biggest difficulties he had along the way was racking his brain for the theme of the movie. Based on a real issue, with the main arc of the story already fixed, Lam wanted to produce something more than gun fights and explosions.  A non-military female character, a war correspondent, was added."[I hope] we can see a military movie from the common people's angle and discuss what is each person's duty?" Lam said.Lam is opposed to the stereotyped muscular tough image of soldiers. "I want to shoot a team, each with his own characteristics," Lam told the Global Times. Focus on the individual is a significant change for Chinese military movies. China's history of fighting invasions influences Chinese war movies, said Zhou Xing, dean of the School of Art and Communication at Beijing Normal University. The need to unite against invaders was the key idea promoted in all New China military movies, "and such work usually contained ideology and political messages," Zhou said."But in the last two or three years we see individual heroes coming out although they often have a close relationship with the nation." A story focusing on an individual character resonates better with audiences, Zhou believes. Successful military blockbusters often deploy computer-generated imagery and special effects, meaning Chinese movies appeared crude compared with Hollywood productions, Zhou said. "First we should admit the gap with Hollywood, but on the other hand we should know all techniques serve the content," he said. "Therefore the audience pays more attention to how the emotions are raised with the help of technologies instead of regarding a movie as a high-tech show."