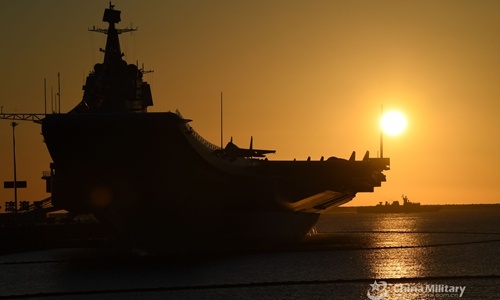 The picture shows aircraft carrier Shandong berths at a naval port in Sanya. China's first domestically-made aircraft carrier Shandong (Hull 17) was officially commissioned to the PLA Navy at a military port in Sanya, South China's Hainan Province, on the afternoon of December 17, 2019, making China one of the few countries in the world that have multiple carriers. (Photo: China Military)

The Chinese military was urged to modernize military theories, organizations, personnel and weapons and equipment in order to reach its centennial goal by 2027 recently set by the Communist Party of China (CPC) Central Committee, the Chinese Ministry of National Defense said on Thursday. It marked the first time that the country's defense ministry explained the goal after it was unveiled in the country's new development plan for the next five and 15 years approved at a key Party meeting in late October and a new military outline released in early this month stressed design on future warfare.

The development goal, established by the fifth plenary session of the 19th Central Committee of the CPC in October, aims to enhance the Chinese military's strategic capability to safeguard national sovereignty, security and development interest, and gives a strategic lead to reach phased goals in the national defense and military modernization, said Senior Colonel Ren Guoqiang, a Defense Ministry spokesperson, at a regular press conference on Thursday.

To achieve the goal, the Chinese military should accelerate the integrated development of mechanization, informatization and intelligentization, while boosting the speed of modernization in military theories, organizations, personnel and weapons and equipment, Ren said.

Quality and effectiveness must be prioritized, and the development of strength of national defense and economy should go together, Ren said, noting that while China has become the second largest economy in the world, its national defense capability does not match this, nor can it adapt to China's international position and strategic security needs.

China's military theories and organizations will see rapid advances amid the military reform, which is systematically changing the Chinese military into a force that can fight wars and win them in a new era by not only referring to other countries' experiences, but also through innovation and preemptive designs on future warfare, thanks to fast technological development and strong personnel training, a military expert who asked not to be named told the Global Times on Thursday.

Earlier this month, the Central Military Commission also released an outline on improving joint combat capabilities of the Chinese People's Liberation Army (PLA). Ren said that this outline aims at giving vision, plans and designs on future warfare, answering the question of "what war to fight" and "how to fight wars" from a systematic level.

The Chinese military's top leader on Wednesday ordered the armed forces to strengthen training under real combat conditions and raise their capability of winning wars, at a time when changes are taking place in the country's security environment, military combat situation, and forms of modern warfare, bringing the military's training to a new stage, the Xinhua News Agency reported.

In terms of the weapons and equipment, Chinese observers including military aviation expert Fu Qianshao and naval expert Li Jie told the Global Times previously that China will continue its momentum in the development of modern weapons and equipment in the next few years.

New weapons like the H-20 long-range, stealth-capable strategic bomber and the country's third and more advanced aircraft carrier could be commissioned, and more current advanced weapons like the J-20 stealth fighter jet and Type 055 large destroyer are expected to be mass-produced, they said.

As Ren said, China's military development will go together with the country's economic development, and will not fall into the trap of an arms race, analysts said.