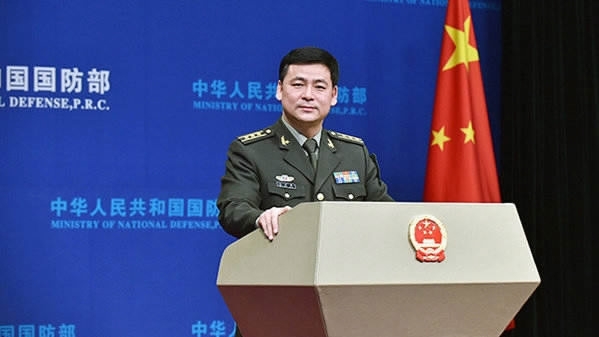 Ren Guoqiang, a spokesperson for the Chinese Ministry of National Defense, made the remarks in response to the United States' approval of a plan to sell Harpoon missile systems worth 2.37 billion U.S. dollars to Taiwan.

The U.S. government has once again approved arms sales to Taiwan, which severely violates the one-China principle and the three China-U.S. joint communiques, Ren said.

The U.S. arms sales to Taiwan seriously interfere in China's internal affairs, undermine China's sovereignty and security interests, damage relations between the two countries and two militaries, and endanger peace and stability across the Taiwan Strait, the spokesperson said.

China has lodged solemn representations with the United States, he said.

The Taiwan question matters to China's sovereignty and territorial integrity and is vital to China's core interests, which allows no external interference, Ren said, adding that any attempt to contain China with the Taiwan question or count on military force to resist reunification will lead nowhere.

The Chinese People's Liberation Army has the resolve, the confidence, and the ability to defeat foreign interference and separatist attempts for "Taiwan independence" in any form, Ren said, stressing that the Chinese military will take all necessary measures to resolutely safeguard China's sovereignty and territorial integrity and continue to advance national reunification. Enditem