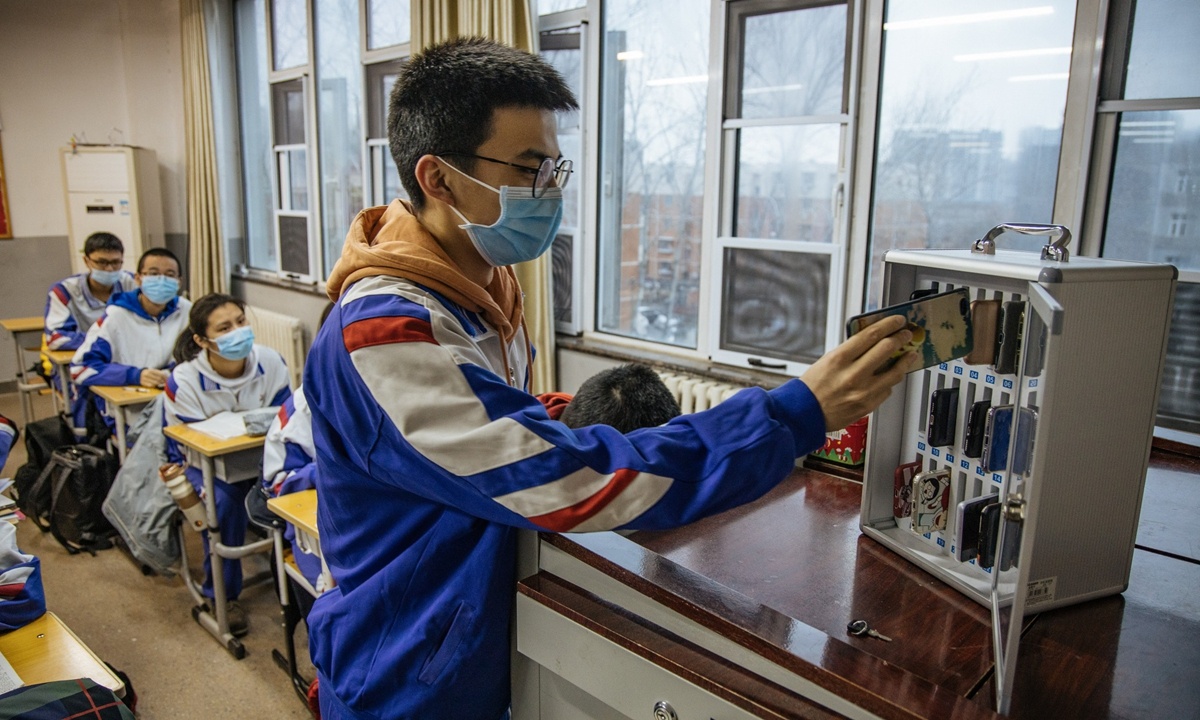 A student in Beijing Jinyuan School puts his mobile phone into the safe deposit box installed in the classroom on March 1, the first day of the new semester. (Photo: Global Times)

China's Ministry of Education (MOE) said on Tuesday that it will establish a department to supervise the after-school education and training sector, as part of a national campaign to rein in the vast but also problematic sector.

The new supervisory body aims to strengthen care for the next generation as underscored by the central leadership, while deepening reform of after-school education, according to a statement from the MOE after a meeting.

The new department will be created as one that cares more about people's feelings, and one that has more fighting spirit, more of a "rule of law" mindset, and more work strategies to promote the reduction of homework and extracurricular training for young students, the MOE said.

In May, China's top leadership called for lightening the burden on primary and middle school students, as well as comprehensive regulation of private tutoring institutions.

Also in May, Alibaba-backed Zuoyebang and Tencent-invested Yuanfudao, two leading after-school training institutions among China's burgeoning and lucrative private tutoring market valued at over $75 billion, were given maximum fines by Chinese regulators of 2.5 million yuan ($389,000) each.

The fines came amid the country's most recent effort to standardize the e-commerce sector and crack down on chaotic after-school training market, which has drawn criticism from many Chinese parents.

In response, some of China's K-12 online education providers have stopped hiring, and some have even reportedly cut staff, as regulation tightens.

A mass layoff and a halt to recruitment for sales and tutoring staff took place at Zuoyebang last week, according to media reports, although the start-up said it was part of a "business adjustment according to company strategies."