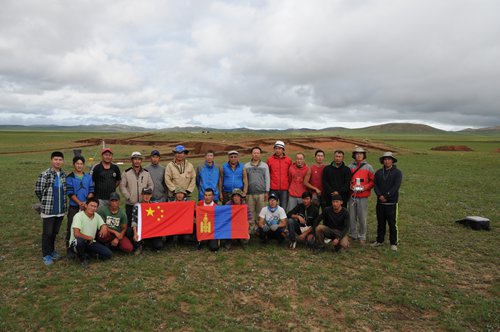 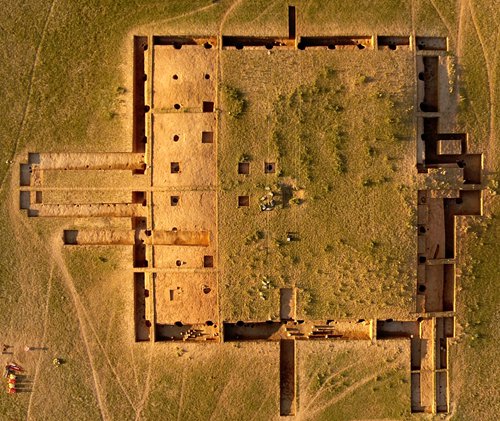 A bird view of the remains of a large building at the center of the Khermen Tal City Site Photo: Courtesy of Song Guodong

Three lost adjoining ancient cities are helping to clear up mysteries surrounding the Xiongnu, the bellicose Mongolian nomads of 2,000 years ago who disappeared from history about 453 AD.Not much is known about the Xiongnu except they shook world history and then rather promptly disappeared. Xiongnu invasion was the prime reason Emperor Qin Shihuang built the Great Wall in 231 BC and it has been theorized that at about 350 AD a Xiongnu sect, known to the West as the Huns, migrated westward and contributed to the fall of the Roman Empire. "As the largest Xiongnu city remains ever found in the area, the site is of huge archeological significance as according to some historians, the Orkhon River area is the place where the empire's imperial court once stood," Song Guodong, the project's Chinese executive leader from the Inner Mongolian Autonomous Region's Cultural Relics and Archaeology Institute, told the Global Times via email on January 28. Since 2014, Song's institute, the National Museum of Mongolia and the International College of Nomadic Culture of Mongolia have been excavating the Khermen Tal City site at the junction of the Orkhon River and one of its major tributaries - the Tamir River, also named Hudgiyn Denj, literally Three Interconnected Cities. This is not the first Xiongnu city site excavated in Mongolia, but "it is the first time a major Xiongnu structure was so thoroughly excavated and studied," Cao Jian'en, the project's Chinese leader and head of the Inner Mongolian Autonomous Region's Cultural Relics and Archaeology Institute, told the Global Times. Considering the Xiongnu were once active on the Eurasia continent including northern China, "study of Xiongnu is an international academic interest and is always an important subject for Chinese archeologists," Cao said. Xiongnu shrine After four years' digging the west and center of the ancient city, the Sino-Mongolia archeological team has more or less mapped out the site and are carefully constructing theories about what they may, or may not, have unearthed.Studying the rammed earth and wooden architectural remains of a large building at the center of the lost city, the team can trace the outlines of symmetrical staircases and platforms that radiate outward toward smaller ceremonial buildings, typical of the layout in other Xiongnu city sites."We believe the building might have once been used as a location for Xiongnu tribal meetings and sacrificial rituals," Song said. "Due to the fact that few artifacts were unearthed at the site and we found no remains of daily belongings, a heating system or burnt ashes, we ruled out the possibility this site is a residence for human beings."Carbon-14 and stratigraphic studies date the building to between 3rd Century BC and 1st Century AD. From the design and structure, the building appears to be a shrine similar to the "temple of dragon," a kind of site dedicated to worship gods that was recorded in Chinese Han Dynasty (206 BC-220 AD) documents. These Chinese historical records about the Xiongnu - one of the world's earliest records of the nomads - have provided clues for the joint excavation. The Mongolian team are experienced with prairie sites, Song said, while the Chinese team boast expertise with wood and stratigraphic analysis. "The biggest challenges are the poor climate and a shortage of drinking water," Song told the Global Times. Prairie temperatures vary hugely, he explained, and on rainy days, team members must make do with filtered muddy water for drinking.Studies of other nomadsKhermen Tal City is by no means the sole Chinese-Mongolian archeological cooperative project.In fact the institute has been collaborating with Mongolian archeologists for 13 years, Song said."We've conducted joint excavation at about 20 nomadic sites in Mongolia since China started archeological cooperation with Mongolia in 2005," Song said. "The Sino-Mongolian archeological team has also formed a rough idea about the locations of remains of several major ancient nomad cultures in the country."A 2006 joint excavation of a burial site in Arkhangai Province confirmed remains belonged to the royal families and aristocrats of the Huihu, a nomadic tribe who built their empire in the 8th and 9th centuries, rather than the Khitans as archeologists had previously assumed. A 2014 discovery at Khermen Tal City of a tomb belonging to Rouran, a Shaman-worshipping nomad active in today's Mongolia during the 4th-6th century, provided precious new information on the complex histories of the country's nomadic minorities.