What would your mother do if you were not going back home for a once-a-year reunion holiday? A Chinese mother recently sent over a "dumpling package" to her son far away studying in Shenyang, capital city of northeast China's Liaoning Province, hoping he would make traditional Chinese dishes based on her recipe to share with schoolmates and friends during the coming 2020 Spring Festival.

A rolling pin, some loose flour, a paper recipe, filing and dough are all well packaged into some dumpling boxes. (Photos: official Weibo account of Shenyang Metro Times)

The mail-delivered package consists of a rolling pin, filling made of three ingredients, some colored dough and loose flour and medium-sized dumpling boxes. Delivered by cold-chain transportation from the provinces of Shandong to Liaoning, the mother spent altogether a costly 665.7 yuan.

Xiaoli, the son, a university student who is working as a computer-design intern, is going to spend his first Spring Festival holiday alone and away from home.

"Surprise, son? I have prepared for you some semi-finished dumpling products. The salty filing is well adjusted while the dough made up just about right. The rest is up to you." Having hand-written down a manual, Xiaoli's mother also gives out specific instructions on how to make dumplings step-by-step, with own drawing. 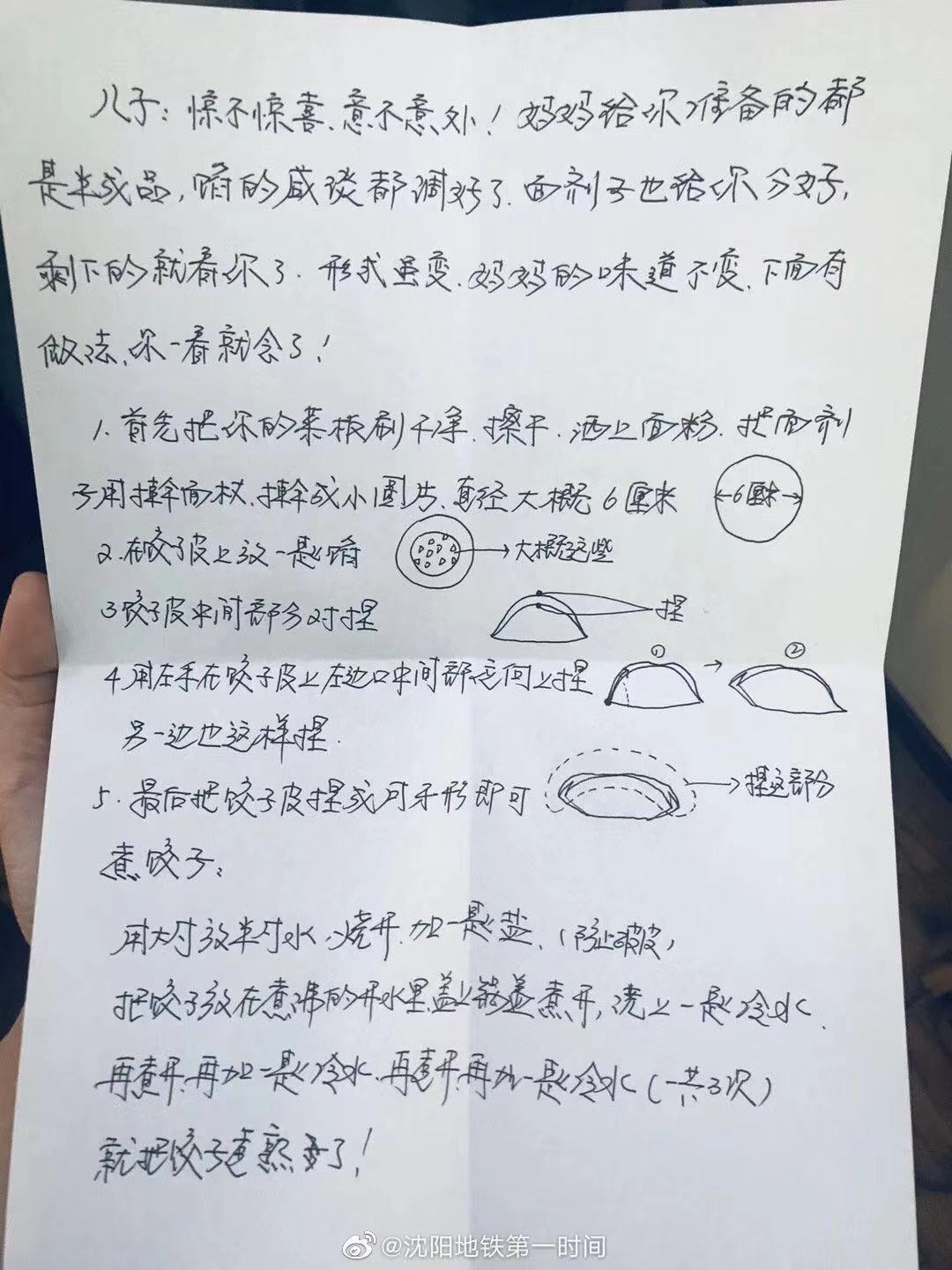 Hand-written manual on how to make dumplings.

Firstly, you brush the panel clean, wipe dry, sprinkle flour, and use the rolling pin to roll out some wrappers. Then put some filling in the center of the wrappers and press the edges, pinching it hard to make the half-moon shaped dumplings. The mother also reminded him to put some salt in the boiling water to make sure the boiled dumplings are not broken.

The reason the mother went to great trouble to send the full set of semi-dumpling products and not just finished dumplings is due to her concern over the holiday atmosphere. She wants him to call other students to come over and make dumplings together. The process is seen as a traditional Chinese Lunar New Year ceremony.

By receiving the package Xiaoli posted a message on his Wechat Moments, calling it a mum's "hardcore operation" and is "the most expensive dumplings he will have." He also said many of his schoolmates are now expecting to try the dumplings.

The message has gone viral on China's social media, attracting tens of thousands of comments. Netizens expressed that such heart-warming behavior does not only show a clear notice on the process of dumpling-making but also filled with a mother's love.

"This is the most heart-melting meal set I have ever seen," commented a user @henokdejinrongxin on Weibo, China's Twitter-like social media platform.

"What a godly mother! Although I would be having my mum's dumplings so I'm not that jealous," joked by Weibo user @mali.

Both mother and son did not expect such popularity. While the mother thought it was worthwhile investing time and money into the act, Xiaoli said he initially had concerns over the cost and felt he should not be lavish by having such expensive dumplings considering he was only on his internship. However, many friends around said it was a worthy holiday gift, and he felt warm and empowered by this piece of love from home.