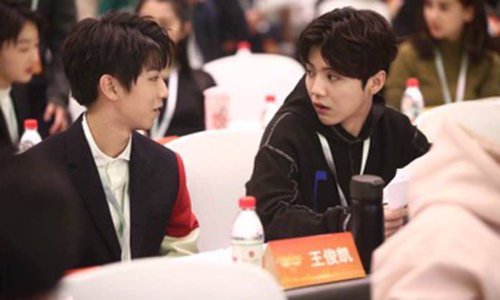 Chinese movie celebrities should take responsibility to convey socialist core values with Chinese characteristics to the public and express confidence in their culture as they present quality works to the world, said analysts after a reported forum for people in the film industry on Sunday.  More than 100 China's first-tier filmmakers including some of the country's most popular movie actors gathered in Hangzhou, East China's Zhejiang Province, to study and implement the spirit of the 19th Communist Party of China's National Congress, local media platform hangzhou.com.cn reported. It is imperative for young moviemakers to unite their thoughts and actions to stay in line with the spirit of the 19th CPC National Congress, and to produce great stories for the screen under the guideline of socialism with Chinese characteristics, said Zhang Hongsen, deputy head of the State Administration of Press, Publication, Radio, Film and Television (SAPPRFT) in an address to the filmmakers, writers and actors attending the forum held in Xixi, Hangzhou. Zhang also urged the celebrity audience to be confident in the Chinese culture, to carry forward and enrich Chinese socialist core values, to celebrate and applaud the new era, while stressing that the quality of movie products should be enhanced and Chinese moviemakers should overcome difficulties and strive to improve the quality of their works.Among the celebrities attending the forum was martial arts expert Wu Jing, the lead actor and director of the Wolf Warrior II, the biggest blockbuster in China this year. Also attending were Wang Junkai, Lu Han and Wu Yifan, young idols who have some of the largest number of followers on Chinese social media. The celebrity audience nodded approvingly at Zhang's speech, some raised their hands for the chance to speak at the lecture, reported hangzhou.com.cn.  "To march into the 'new era' proudly, first we should cherish it," Wu said at the forum, "foreigners tend to attach great attention to the Chinese movie market rather than Chinese movies.""Hollywood only asks for good ideas but never gives their core technologies to make these ideas become real works, and by doing so lures our young talents. So it is important for us in the business to use our Chinese wisdom to tell great Chinese stories," Wu added.Lu Han, who was born in 1990, and has over 42 million followers on Sina Weibo, China's twitter like platform, also told the forum that his generation grew up in an environment with greater influence from overseas culture than previous generations. But he has felt growing pride in the extensive and profound Chinese culture, and vowed to promote traditional Chinese culture into the world.Such forums provide a platform for Party agencies and government departments to resolve issues with moviemakers through direct communication, said Chen Shan, a professor at the Beijing Film Academy.Chen told the Global Times on Wednesday that the Chinese movie industry is at a crossroads. While the film sector has now built a solid infrastructure, moviemakers must improve their 'cultural cultivation' and tell China's stories more beautifully. Chinese movies lack but need world vision and moviemakers should strive to connect Chinese culture to the world in a more effective way, Chen added. Xi Jinping, general secretary of the CPC Central Committee, said at the opening of the 19th CPC National Congress on October 18 that cultural confidence represents a fundamental and profound force that sustains the development of a country and a nation."We should cherish our cultural roots, draw on other cultures, and be forward-thinking. We should do more to foster a Chinese spirit, Chinese values, and Chinese strength to provide a source of cultural and moral guidance for our people," Xi said.The development of the Chinese movie industry cannot be done without talented young people, and it also cannot be done without the Party guidance, Su Wei, a professor at the Party School of the CPC Chongqing Municipal Committee, told the Global Times.Celebrities are also from and part of the people, and their "pop celebrity status" could also help Chinese socialist core values reach to the country's youth, Su said. Chen agrees "Chinese movie actors or directors must be different from those from capitalist countries, and they should take responsibility to convey the country's core values to the public."According to the SAPPRFT, as of November China's 2017 box office exceeded 50 billion yuan ($7.6 billion), the first time the country has broken the 50-billion-yuan mark. Revenue from domestic movies reached 26.2 billion yuan, accounting for 52.4 percent of the total, the Xinhua News Agency reported on Monday.