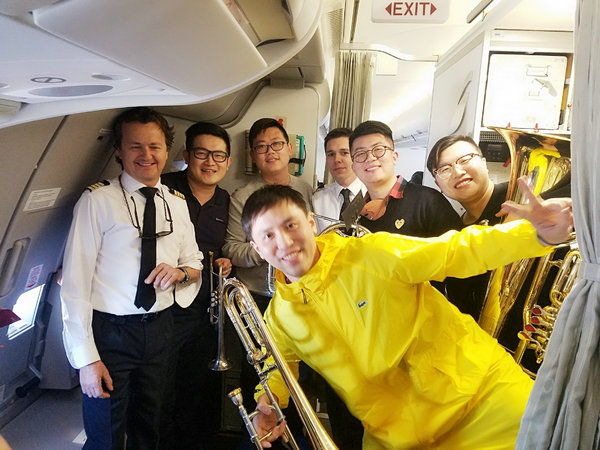 Five young Chinese musicians from Zhejiang province gave a surprise to passengers on a flight to Madrid, Spain, Jan 31.

The artists played Just a Closer Walk, winning applause from people on the plane. After 13 hours of travel, their music delighted many tired souls.

This show is a part of 2018 Happy Chinese New Year celebrations, called a "music flash mob".

The performers, Han Fei, Yao Tianhao, Du Hongzhi, Zan Yuetao and Dai Zhahong, were all from the Hangzhou Philharmonic Orchestra.

They and other artists from Hangzhou formed an art troupe with 30 members. The troupe will perform during the Happy Chinese New Year celebrations in a series of Latin American countries.

As 2018 marks the 30th anniversary of the establishment of diplomatic relations between China and Uruguay, the troupe will tour in the country to participate in many celebrations from Jan 31 to Feb 14. The artists will also perform in the 2018 Happy Chinese New Year fair in Argentina.