The Chinese Consulate-General in Hamburg, Germany confirmed on Saturday that a total of 58 Chinese citizens were aboard a cruise ship owned by German tourism giant TUI that has been quarantined after one individual tested positive for COVID-19 on Thursday. 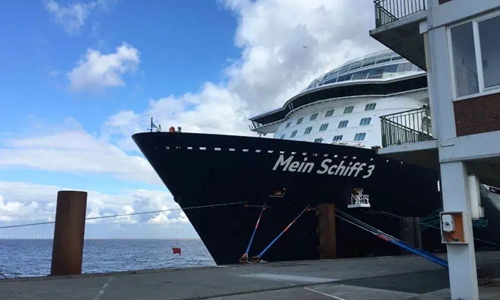 The 58 Chinese crew members on board were all in good health, China News Service reported, citing comments made by the Chinese Consulate-General in Hamburg regarding the issue on Saturday.

The vessel, code-named Mein Schiff-3, is now docked at the cruise liner's home port of Cuxhaven, on the coast of Germany's North Sea, and all 2,899 crew members would remain in quarantine onboard until further notice, TUI said in a statement.

The vessel reported no other passengers onboard, TUI added.

The confirmed COVID-19 case has been sent to a local hospital for quarantine and medical treatment, and displayed an intermediate level of COVID-19 symptoms.

According to the German cruise liner, all 229 people who had close contact with the case tested negative for COVID-19.

The China News Service report also noted that the 2,899 crew on board would finish testing on Sunday local time, results of which would come out on Monday.

The Chinese Consulate-General in Hamburg has not responded to a Global Times' request for comments on further updates.