Chinese nationals in Ukraine sign up for evacuation after call from FM
Global Times
23:10, October 16, 2022

Some Chinese nationals still in Ukraine have signed up for evacuation from the country, with most registering for organized evacuations, while others are preparing to leave Ukraine on their own, the Global Times learned on Sunday, after the Chinese Foreign Ministry urged Chinese citizens to leave Ukraine, citing the grave security situation. 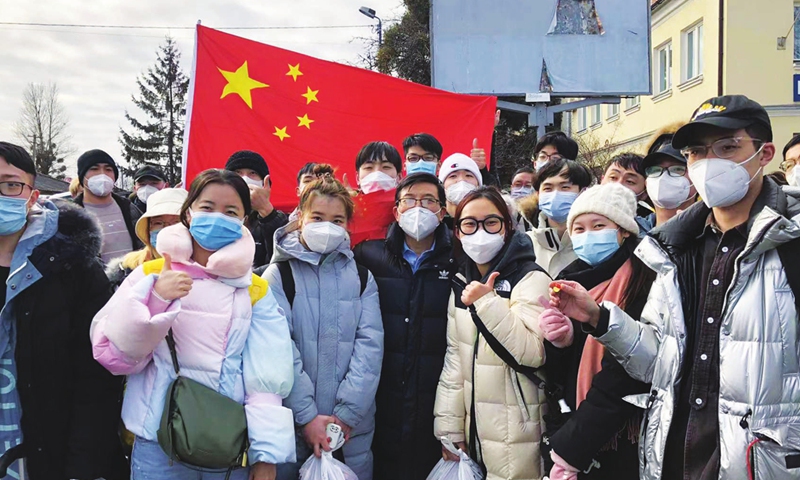 Students evacuated from eastern Ukraine's Sumy city pose with the Chinese Ambassador to Ukraine Fan Xianrong (center) for a photo in Lviv, Ukraine on March 9, 2022. (Photo: Courtesy of the Chinese Embassy in Ukraine)

The move, following the large-scale evacuation in March that safely returned some 6,000 Chinese nationals in Ukraine back to their motherland, represents the Chinese government's greatest efforts to protect its citizens, as the Russia-Ukraine conflict further escalated, experts noted.

In a notice issued on Saturday, the Chinese Foreign Ministry said that given the grave security situation in Ukraine, it calls upon Chinese nationals still in the country to strengthen security precautions and evacuate the country. The Chinese embassy will assist the organization of evacuation for those in need, the notice said, while urging them to register their personal information to the embassy as soon as possible.

Later on Saturday, the Chinese Embassy in Ukraine said via its WeChat account that it will offer assistance and help coordinate relevant evacuation matters such as emergency document processing.

The official calls came as the Russia-Ukraine conflict continued to escalate after the attack on the Crimean Bridge earlier this month, which prompted a harsh response from Russia, including missile strikes in Ukrainian cities.

"After the attack on the Crimean Bridge, civilian infrastructure became the target of military conflicts, which is clearly an escalation on the battlefield. Our evacuation this time is more of an early warning, making the greatest efforts to avoid damage on our citizens' property and lives," Cui Heng, an assistant research fellow from the Center for Russian Studies of East China Normal University, told the Global Times on Sunday.

After the evacuation mission in March this year that moved some 6,000 Chinese nationals out of Ukraine, a small number of Chinese nationals have returned for business or for school. Those who are still in the country are mostly students, businessmen or enterprise staffers stationed in Ukraine.

This time, it is easier and safer to organize evacuation now, as communication has not been cut off and flights are normal, observers said.

While hearing the sirens sounding all night long, Chinese nationals reached by the Global Times said they are remaining relatively calm after the months of conflict, and have learned to protect themselves amid escalating tensions.

Gio Guo, a Chinese national based in Kiev with his Ukrainian wife and children, told the Global Times on Sunday that he and his family do not intend to leave at the moment. "It has remained quiet and calm in recent days and we do not feel particularly different from days before the war," he said.

However, uncertainties remain, as the conflict continues to escalate and the US and its NATO allies are still fanning the flame, experts noted.

In the latest development, 11 people were killed during a shooting training session at a military training ground in Russia's Belgorod Region, with another 15 more wounded, TASS reported on Saturday, citing the Russian Defense Ministry.

According to TASS, the attack was carried out by two citizens of "a CIS country" who "committed an act of terror," the Russian Defense Ministry said.