Three chartered flights - one on Tuesday and two on Wednesday - taking Chinese nationals back home from India, which has seen daily spikes in newly confirmed COVID-19 cases, have arrived in China. 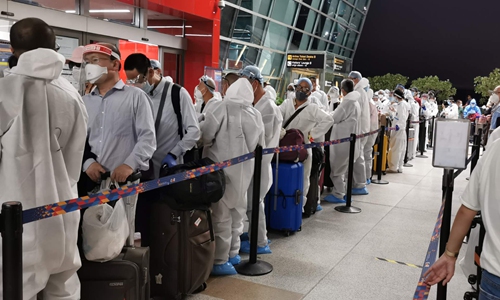 Chinese nationals line up to take the first chartered flight from Delhi to Shanghai on Tuesday. (Photo: Courtesy of Yu Libiao)

Two more flights are on the way - Thursday's flight departed from Delhi to Zhengzhou and Friday's flight will depart from Mumbai to Chongqing, passengers who booked the flights disclosed to the Global Times.

The chartered flights brought the stranded Chinese visitors back at a critical time when India reported spiking infections across the country. On Wednesday, the country witnessed more than 9,900 cases for a third consecutive day, with 9,985 fresh cases, data from Indian Health Ministry showed.

"We looked at each other's eyes. I may not know your name but I know we have something in common - we're from China." This is how Yu Libiao felt the moment he reached the airport on the first chartered flight.

Watching stranded Chinese nationals rush to New Delhi Airport one after another from states across India, it seems the peaceful music in Yu's headphones brightened along with his mood.

In early April, Yu was given the news that his father had suffered a cerebral haemorrhage. Yu lost the desire to work in India, where he had been since graduating from college. Ever since, he waited and sought flights back home as soon as possible.

"The motherland is here. We will take you home." When the crew broadcast this message on the plane, Qianqian almost burst into tears.

Qianqian is a travel blogger who had been stranded in India for half a year, witnessing how the epidemic in the country deteriorated, with confirmed cases rising from 300 to 270,000.

After hours of waiting at the airport, the flight eventually brought Yu, Qianqian and 246 other Chinese back home to Shanghai on Tuesday. Upon arrival, they received nucleic acid tests and will be quarantined at hotels for 14 days before being allowed to go.

For many others, the chartered flight is more like a rescue mission.

Shi Weiqin says he was like a nervous wreck, losing his temper whenever he talked to people while shutting himself inside a three-storey building in Gurgaon, a city near Delhi, for 77 days.

Shi's day would start with two hours of exercise on the rooftop at 6:30 am, eating on the first floor, playing with his phone, and then falling into a foul mood for the rest of the day. The pattern would repeat itself for his entire time in lockdown.

The only thing that could ease his anxiety was checking the calendar. There were three times he had hopes of taking a flight home, but each time his hope was dashed.

"My friends and I were considering going back to China before the lockdown but our hope that the epidemic would be over and the lockdown would ease meant we failed to grab our chance," Shi said.

Shi began his journey to India with five of his friends on January 28, and had planned to photograph Jama Masjid in New Delhi and a number of other sites before leaving on March 28.

But the Modi government's announcement of a nationwide lockdown on March 22 disrupted their plans. "The chartered plane eventually relieved my anxious heart," said Shi, who is now also under quarantine in Shanghai.

During those 77 days, Shi was so fearful of becoming infected, he only went out of his door once.

India is called an "incredible country" but people there didn't seem to care about the deadly virus.

Due to its relatively backward medical facilities, high population density and widespread infections in urban slums, local Chinese are worried about the quick spread of the epidemic, said Zhang Wenxin, a Chinese national who also returned on the chartered plane.

One N95 mask cost 850 rupees ($11.24), which means many poor people could never afford one. Only about 70 percent of people on the street wear masks, and many wear them incorrectly, Zhang said.

At the start of the nationwide lockdown in India, streets were mostly empty and anti-epidemic control measures were tight. But after the lockdown was extended five times, restrictions became more relaxed, some Chinese said, worrying that the epidemic would further spread in the country, where life in some cities have gone back to normal.

Chinese nationals stranded in India have always been eager to return home and have tried to arrange commercial chartered flights through various channels, but were stymied by local regulations.

There were also people claiming to sell plane tickets to China via a third country, raising people's hopes of returning, but which were later dealt a heavy blow as it turned out to be false information.

The Chinese Embassy in India had also tried to collect information on Chinese nationals with the intention of bringing them back home after India's first lockdown on March 22, but this was unsuccessful due to local traffic restrictions, some Chinese nationals in India who had been closely following information from the embassy told the Global Times.

Embassy staff played an active role helping stranded Chinese get back home, checking the information of each and every registered Chinese national who wanted to take a chartered plane, explaining to them all the problems they had encountered and sometimes working until 5 am.

To get a ticket on the chartered plane, Chen Ping, who had been in Bangalore for four months, made more than 50 phone calls to the embassy and expressed her strong desire to go back home.  Her flight, which cost about 10,000 yuan, is on Thursday and will take her to Zhengzhou, Henan Province.

The five chartered planes will bring more than 1,000 people back home but there are roughly 3,000 more registered for charted flights waiting to return, sources said. The Chinese embassy and local Chinese nationals are always ready to give up the hard-won opportunity of returning home to those who need it more, such as pregnant women and those who have emergencies at home.

As the epidemic continues to ravage the world's second most populous country, WHO officials have said that whether humankind can achieve a decisive victory over the virus largely depends on how India copes with it.

Many believe that India has underestimated the epidemic. Even though large numbers of Indians in rural areas are not being counted in official figures, India still has the fifth highest number of COVID-19 cases in the world, behind only the US, Brazil, UK and Russia.

The chartered flights offer hope for stranded Chinese nationals, but they have been warned of becoming infected on the way back, and have been told to stay calm in India or wait for the resumption of international flights, public health experts noted.

All Chinese passengers returning from India will undergo 14 days of quarantine at hotels before going home, which is a requirement of the Chinese government as it fears a resurgence of the domestic epidemic from imported cases.

Hotels feel like home, Yu said, where they are carefully guarded by volunteers who make sure no one takes a step out of the room.

As one of them said, "As long as my feet are in Chinese territory, that is my home."

But Shi still has fond memories of India, which he describes as an incredible country. "Maybe later, I will come back and bring my friends there to take photos, as a guide, when the epidemic is over," he said.