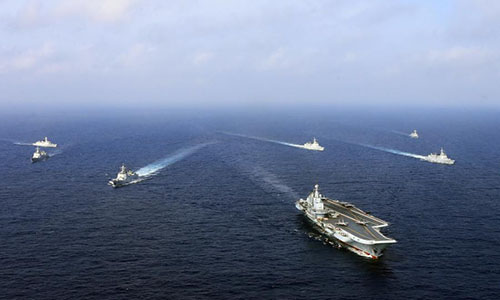 This is a whole new exploration by the navy to develop ship-aircraft command talent, as China's aircraft carrier force is in urgent need of such talent, the PLA Daily said, noting that the trainees were carefully selected, passing more than 10 tests including political thought, psychological quality, and comprehensive abilities.

"I will gain the ability to command coordinated ship-aircraft operations by actually sailing warships and passing tests."

The training seeks to develop inter-disciplinary talent, as their experiences in both flying and sailing would work in synergy, Wei Dongxu, a Beijing military analyst, told the Global Times on Monday.

"I believe this is a move that aims to create top commanding officers for future aircraft carriers," Wei said, noting that this kind of talent would be practical in boosting the capability of carriers.

Many US aircraft carrier captains and officers at command posts used to be carrier-borne aircraft pilots, and this model is worth studying, Wei said.

Liu said he was only a surface vessel officer and no pilot. He said he learned to fly trainer aircraft and helicopters, but only for a few hours.

"When we have more aircraft carriers in the future and more [carrier-based] pilots, as they grow older, there will be [pilots who become captains]," Liu said.